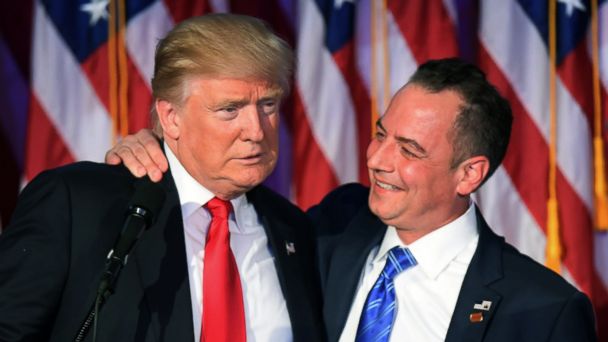 Donald Trump has named Republican National Committee Chairman Reince Priebus as chief of staff to his new administration and former Breitbart CEO Steve Bannon as chief strategist and senior counselor to the president.

This weekend Priebus and Bannon emerged as the top contenders for the chief of staff position, with the two seen as offering two sharply different paths for Trump to take in his first major hire as president-elect.

Priebus has fostered close relationships over time with lawmakers from all factions of the party, while remaining steadfastly loyal to Trump once it became clear he had secured the party's nomination.

Bannon on the other hand is a firebrand of the far right, whose website has in the past targeted many GOP leaders, including House Speaker Paul Ryan, deriding them as "establishment" figures.

A press release announcing the appointments said both will work "as equal partners to transform the federal government" and to assist Vice President-elect Mike Pence in his new role as transition chairman.

"I am thrilled to have my very successful team continue with me in leading our country," Trump said in a statement. "Steve and Reince are highly qualified leaders who worked well together on our campaign and led us to a historic victory. Now I will have them both with me in the White House as we work to make America great again."

Presidents-elect typically name a chief of staff as one of their first and most crucial appointments because the person in this role can help determine a president's style of governing.

But if precedent is any indication, the naming of Bannon as both Trump's chief strategist and senior counselor will provide him just as much access to the Oval Office.