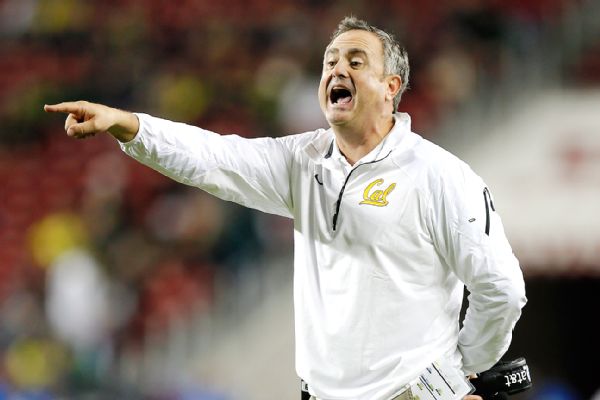 Sonny Dykes has been fired as head football coach at Cal, the school announced Sunday.

"Coach Dykes clearly built up our program -- both on the field and in the classroom -- and he leaves Cal in a stronger position than when he arrived," Cal athletic director Mike Williams said in a statement. "For that alone, he deserves credit and our thanks. After our bowl win last season, we showed our commitment to him with a contract extension. But after looking at a number of factors after the end of this season, I felt that we needed a change of direction for the good of our student-athletes and our program."

In a press conference on Sunday afternoon, Williams confirmed that Dykes was technically fired "without cause," but he acknowledged that Dykes' interview for the Baylor head-coaching vacancy in December -- a job that eventually went to Matt Rhule -- was one of the factors in the termination.

"It's part of the overall evaluation," Williams said. "We want to make sure that we have a coach who wants to be here." Dykes, 47, was under contract through the 2019 season and is owed 70 percent of his remaining base salary and talent fee, which is $5.88 million.

Williams said that Cal's athletic budget is heavily reliant on a successful football program, and he empathized the university's desire for a strong, lasting presence at head coach.

"We want someone who is committed to the university long term," Williams said.

As the Bears turned to finding Dykes' successor, speculation on social media immediately turned to former Oregon coach Chip Kelly. After a dominant run at Oregon, Kelly had less success in the NFL and was fired earlier this month by the 49ers, a year after being dismissed by the Philadelphia Eagles. So far, however, all that is just speculation. Although Williams did say he had a "short list" of candidates for the job, he refused to divulge any further information about it until after a hire is made.

Dykes sent the following message to the team after his firing: "I am as surprised as you all about the news today. I am sorry you all found out the way you did. All I can say is I am incredibly proud of each and every one of you; it has been an honor to be your coach. If you keep working hard and doing things the right way, you will have success in everything you do. Please do not hesitate to reach out to me any time. God Bless."

Dykes also said in a subsequent statement that he was "surprised and disappointed'' by the move and called Cal a special place.

"I am comforted, however, that I leave this program in much better shape than when I arrived four years ago,'' he said. "I am confident Cal will find a great coach to lead these great young men, they deserve nothing less. As for me, change is unfortunately a constant in this profession. I have great passion for what I do and how I do it. I look forward to the next chapter.''

Dykes finished the 2016 season with a 5-7 record, his third losing season in four years at California. His best year at Cal was in 2015, when Dykes led the Golden Bears to an 8-5 record and a victory in the Armed Forces Bowl. Also that year, Cal quarterback Jared Goff was the No. 1 pick in the NFL draft (by the Rams).

In December, Dykes interviewed for the head-coaching vacancy at Baylor, but Matt Rhule was hired for that job.

A native of Big Spring, Texas, Dykes is the son of legendary Texas Tech coach Spike Dykes. Sonny Dykes played baseball at Texas Tech and worked as a football assistant coach at Kentucky and Northeast Louisiana before joining the Red Raiders' staff in 2000.

Before coaching at Cal, Dykes was head coach at Louisiana Tech, where he led the Bulldogs to a 22-15 record in three seasons.

As an assistant, Dykes worked as offensive coordinator for Mike Stoops at Arizona and for Mike Leach at Texas Tech.

ESPN's Kyle Bonagura and The Associated Press contributed to this report.