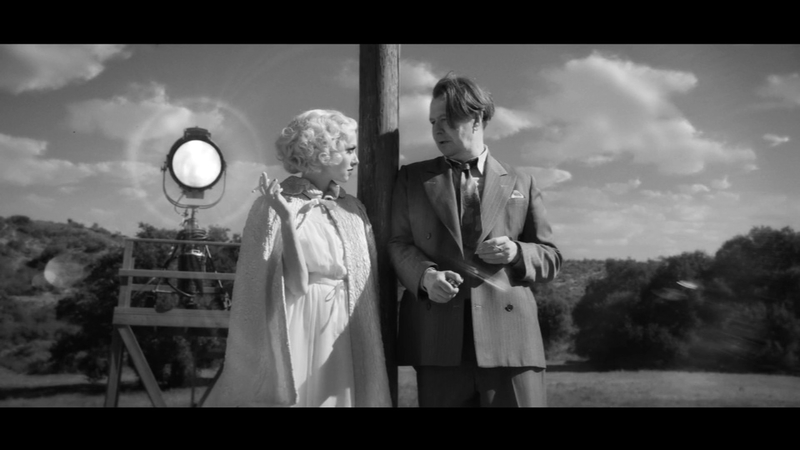 LOS ANGELES -- The Oscar nominations were announced Monday morning, and some history was made.

Not only did women account for a record-breaking 76 nominations, but two women were nominated in the best director category for the first time.

David Fincher's "Mank" leads nominations to the 93rd Academy Awards with 10 nods, and for the first time, two women - Chloé Zhao and Emerald Fennell - were nominated for best director.

Below are reactions from some of the nominees.

Daniel Kaluuya, Best Actor in a Supporting Role for 'Judas and the Black Messiah.'

"Chairman Fred Hampton was a light, a beacon of a being who would illuminate all he touched with his incredible message. With the ability to command any stage and robbed of his opportunity to captivate a global audience. He created strategies that supported and uplifted the black community but also unified other communities with his laugh, his mind, his passion and his love. Today, I am humbled to be nominated for portraying a man whose principles I deeply respect and for guiding me to walk in his footsteps. With the blessing of Chairman Fred Hampton's family, and the unwavering support from Ryan Coogler, Shaka King and Charles King, and the cast led by LaKeith Stanfield and Dominique Fishback, I became a vessel for Chairman Fred's spirit at a time when we need his rally cry for equality and justice more than ever. I commend my fellow nominees for their impressive work. To be seen and celebrated by my peers in the Academy of Motion Picture Arts & Sciences is beautifully humbling and I am deeply grateful. Thank you."

Leslie Odom Jr., Best Actor in a Supporting Role for One Night in Miami'

"I owe Sam everything for this role. I leaned into Sam Cooke's signature confidence and signature swagger to make this believable. There were plenty of places that I felt like I might not measure up. But in those moments, I would reach for Sam's confidence, because he knew how to measure up. There were times, there were moments that it felt like bringing him so close helped me find some of that magic in myself."

"After such a stressed pandemic year, there is a kind of comfort and reassurance in knowing that we soldier on in many ways with important traditions. In our industry there is nothing more traditional than the Academy Awards, which hopefully sends a sign of hope that we will get out of this. The Oscars are such a sign that normalcy still exists. In my case today marks my third Academy Award Nomination. Not to trivialize the current state of the world, it is a source of great pride and an honor to be recognized alongside these other tremendous, wonderful artists."

"I'm so thrilled for our nominations! Thank you to the Academy. I'm grateful to have gone on this journey with our talented team of filmmakers and to have met so many wonderful people who generously shared their stories with us. Thank you so much to my academy peers for recognizing this film that is very close to my heart."

"Wow Wa We Waa! Thank you to the Academy for this honour! I really can't believe this - to hear my name in the company of these remarkable women and their breath-taking performances is a dream come true! I am so grateful to Sacha Baron Cohen and my Borat family and congratulations to them for their Adapted Screen play nomination."

"Never in my dreams did I ever think a Korean actress would be nominated for an Oscar, and I can't believe it's me! I am incredibly humbled by the honor. Thank you so much AMPAS, A24, Plan B, my Minari family and our entire cast and crew. We made this film with love, and I thank you for loving us back. And thank you, Isaac. This is all because of you!"

"I'm barely able to speak in coherent sentences after this unbelievable news. I am so incredibly grateful to every single wonderful person who worked on Promising Young Woman, the greatest most hardworking and talented cast and crew in the world. For their work to be honoured by the Academy means so much, and I am especially thrilled for Carey, whose extraordinary genius made this film what it is, and for Fred whose dedication made the impossible possible, for their individual nominations. To be part of this historic year for the Academy, alongside so many exceptionally gifted filmmakers means more than I can possibly describe, and I'm particularly proud to be nominated beside the amazing Chloe Zhao. There have been so many exceptional female filmmakers this year, making such beautiful, inspiring, challenging, varied work, that I am truly honoured and grateful to be among their number. Thank you to the Academy, Focus Features, FilmNation, LuckyChap, my whole immensely patient and wonderful team. I will stop crying eventually, but not yet."

"Wow! I'm honoured to be nominated by my fellow actors alongside such inspiring performances, and am grateful to the Academy for their support and encouragement. I'm equally thrilled for our visionary writer-director Darius Marder and the brilliant Paul Raci, as well as our editor Mikkel, sound designer Nicolas, and co-writer Abe Marder. These nominations represents the time, generosity and talents of so many - all of our incredible cast, crew, producers, and in particular I'd like to thank my mentors in the drumming, addiction recovery, and D/deaf communities."

Sound of Metal is about how a health crisis can cut you off from your life and loved ones, and force you to grow in unexpected ways. In a challenging year for so many, I hope this story can inspire us to forge new and deeper connections with ourselves and others.

"I'm absolutely elated this morning, and I am so honoured to be in such esteemed company across all categories. Thank you to the Academy for embracing this story which means so much to me. It's all thanks to my dear friend - the fearless, hilarious, bold writer and director Emerald Fennell and the incredible cast and crew she assembled. We all signed on because we believed wholeheartedly in her vision, and I'm so grateful to her for inviting me to be a part of it."

"Congratulations to all my fellow nominees. I'm beyond thrilled and deeply grateful for Netflix's brilliant support of their artists. I owe so much to Ron Howard, Amy Adams, Owen Asztalos and my genius hair and makeup team. This wouldn't have happened without them. I dedicate this honor to all the grandmothers in the world who fight to give their children a better life."

"Working with David Fincher on Mank has been the highlight of my career, and being recognized by the Academy for an experience that brought me this much joy and fulfillment feels surreal. I won't be able to thank David enough for trusting me with this role and for the honor of reintroducing the world to the Marion Davies that I've come to know. To get to study this brilliant, humble woman and help restore her legacy has been a true privilege. Congratulations to David, Gary, and the whole cast and crew of Mank today -- your brilliance has not gone unnoticed and I am humbled to share this recognition with you."

Aaron Sorkin, Best Picture for 'The Trial of the Chicago 7.'

"It took fourteen years to make The Trial of the Chicago 7 and I'm thankful for all of them. We thank the Academy for recognizing so much individual achievement this morning, but our biggest thanks is for including our film among the extraordinary movies nominated for Best Picture. We learned a lot of hard lessons last year, but a nice one was that people will find a way to go to the movies, even if they can only go as far as their living rooms.

"Thank you to the Academy for this honor. I couldn't imagine this happening as we struggled on the journey to make this film, and now I understand why Oscar moments are filled with endless thank you's. I feel incredibly grateful to the entire family of cast and crew behind Minari who persevered to make this film. I am especially thankful to my mom, dad, and sister, who filled that small trailer home in Arkansas where we started, and my wife and daughter who mean more to me than anything. I'm blessed that the minari my grandmother planted by the water continues to grow."

Thomas Vinterberg for Best International Feature Film for 'Another Round'

"This is wonderful news. Thank you very much to the Academy, and congratulations to my fellow nominees. I'm honored to be in your company. I've made some films over the years, but none of them have meant so much to me as this one. During a long journey like this, it matters most to be surrounded by great collaborators who are also great friends. My actors, Mads, my co-writer Tobias, Sturla my DOP, my producers from Zentropa and the amazing behind the scenes talent were all on this journey with me and gave all they had. Thank you from Denmark."

"Sound of Metal was made by a group of artists who poured their hearts into this entire process. To have our cast and crew's intentions reflected in six first-time nominations has been overwhelming to say the least, especially on the back of something that everyone involved in the film did out of pure artistic passion. Thank you to Amazon Studios and the Academy for this extraordinary morning."

"On behalf of our whole amazing talented wolfpack in Kilkenny, Paris, Luxembourg and beyond, we are hugely grateful and happy to be nominated for this year's Oscars. What an honor for us all and a huge thanks to our friends in Apple, GKids, and all our financing and distribution partners worldwide who allowed us to make this film and bring it to the world. Our film is a love letter to hand drawn animation and its timeless potential, to nature and our shared biosphere and to our home here in Ireland, its history and culture, its folklore and its people."
Report a correction or typo
Related topics:
arts & entertainmentcelebrityoscarsaward showsacademy awardsmovie newssandy kenyonotrc
RELATED
2 women nominated for best director, an Oscars first
'Sound of Metal' star Paul Raci thrilled by Oscar nomination at 72
Meet the real people who inspired 'Nomadland'
Steven Yeun becomes Oscars' first Asian American best actor nominee
OSCARS
Denzel Washington poised for Oscar nod in 'The Tragedy of Macbeth'
Oscar buzz about Kirsten Dunst in 'The Power of the Dog'
Oscars will have a host this year
Tom Hanks, Laura Dern to host 'A Night in The Academy Museum' on ABC
TOP STORIES
San Mateo Co. drops contract with COVID testing company
Some Bay Area counties begin easing COVID restrictions
WATCH LIVE AT 2PM: 49ers-Rams NFC Championship Game preview
Anti-racist lawn libraries take hold in Bay Area neighborhoods
COVID-19 updates: VTA adds vaccine mandate for employees
Snapshot of 49ers' memory-keeper during 2021 playoff run
Why are we seeing wildfires in January? Expert explains
Show More
Diego Verdaguer, Argentine singer-songwriter, dies of COVID at 70
NASA marks 36 years since Challenger explosion disaster Friday
Here's how NFTs could be future of fundraising for colleges
Hunt for 'The Doodler,' 1970s serial killer who targeted gay men
10 injured in PA bridge collapse; human chain formed to help
More TOP STORIES News