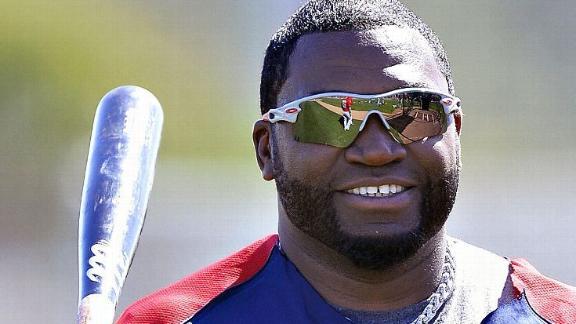 BALTIMORE -- Manager John Farrell made no predictions on how long the Boston Red Sox will be missing outfielder Shane Victorino, who was shown to have a Grade 1 strain of his right hamstring in an MRI administered Sunday and placed on the 15-day disabled list Monday.

"It's going to require some time down," Farrell said. "We'll have a better read on his potential availability, I would say, 7 to 10 days into the 15-day DL stint and see how he responds to treatment at that point. But the overall projected date of return is when he's ready to go. Whether that's 15 days or beyond, that remains to be seen."

A Grade 1 strain is the mildest of the three grades used to evaluate such an injury.

Rookie Jackie Bradley Jr. took Victorino's place on the roster after losing a spring training competition with Grady Sizemore for the starting job in center field. Bradley was not in the Opening Day lineup, which had Mike Carp in left field, Sizemore in center and Daniel Nava in right.

Carp was having dinner Sunday night when he was informed by Farrell in a text message that he would be in the Opening Day lineup. The manager said Carp was swinging the bat well at the end of spring training and gave the team another left-handed hitter in the lineup. He also preferred to have Jonny Gomes on the bench as a right-handed pinch hitter.

Bradley will get playing time in both center and right, Farrell said.

"With Vic out of the lineup, we're going to see a little bit of a rotation with all five of those outfielders," Farrell said. "That's where we currently are."

Victorino strained the hamstring in the final exhibition game Saturday. He said he felt the hamstring grab as he was rounding first following his third-inning double at JetBlue Park against the Twins.

"He'll be down here today, and whether or not he returns to Boston before we do to be with [medical services director] Dan Dyrek daily, that's still in the works," Farrell said. "What we want to do is maintain some constant treatment in a central site."

The injury occurred despite the Red Sox going to considerable lengths this spring to prepare Victorino in such a way as to avoid the hamstring, back and groin issues that limited him to 117 starts last season. He played in just nine exhibition games this spring, the Sox electing to delay his game activity while he stayed on the team's back fields working on conditioning and supervised baseball activity.

"Every piece of information that we have doesn't suggest there's something structurally wrong," Farrell said. "He's been banged up at times. He's been plagued by pulled muscles, and we're dealing with it again."

Victorino, 33, has dealt with core issues throughout his career. He went on the DL last May with a strained left hamstring and missed seven games last April with a lower back strain. Both the hamstring and back continued to be issues throughout the season but were managed sufficiently to allow Victorino to remain on the field, even though he eventually abandoned switch-hitting and batted right-handed almost exclusively the last two months of the season. Even that he turned into a positive, posting a .300/.386/.510 slash line while being hit by a pitch 11 times in 115 plate appearances batting right-handed against a right-handed pitcher.

Victorino had proved to be one of the Red Sox's most valuable performers in 2013 after a disappointing 2012 season in which the Phillies traded him to the Dodgers at midseason and the Dodgers subsequently dealt for outfielder Carl Crawford, signaling to Victorino that his days in L.A. were numbered.

He responded with a .294/.351/.451 slash line in 122 games, batted .429 in the AL Division Series against the Rays and hit a grand slam that was decisive in Boston's Game 6, ALCS-clinching victory over the Tigers.

Victorino started fast for the Sox last season, with two hits and three RBIs in an 8-2 Opening Day win over the Yankees in New York, and had eight hits in the team's first four games.

"Vic will be missed," Farrell said, "but we've got good players ready to step in and contribute."

SweetSpot TV: Victorino To DL
Eric Karabell and David Schoenfield discuss Red Sox OF Shane Victorino being on the disabled list to start the season.

Fantasy Baseball: Replacing Shane Victorino
With Red Sox right fielder Shane Victorino heading to the DL for 15 days - and perhaps longer - Eric Karabell looks at who might benefit from his absence.