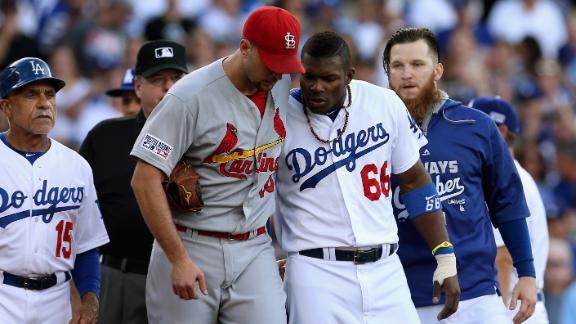 LOS ANGELES -- The Los Angeles Dodgers and St. Louis Cardinals, who have a history of animosity, had a benches-clearing incident in the third inning of their first National League Division Series game Friday night after Adam Wainwright hit Yasiel Puig with a 90 mph fastball.

Puig was taking his base when the Dodgers' Adrian Gonzalez and Cardinals catcher Yadier Molina got into a heated argument near home plate. Soon, both teams' benches and bullpens emptied onto the field. No punches were thrown.

"I was just basically saying, 'You guys keep doing this over and over. We're not going to put up with that,'" Gonzalez said after the game. "They're going to say it's not on purpose, but come on. It's Wainwright. He knows where the ball is going."

Gonzalez said Molina's response was, "You've got to respect me."

"I thought that was out of context, but it's what he said," the Dodgers first baseman said.

At one point, Wainwright and Puig seemed to be calmly talking to one another. Wainwright had brushed Hanley Ramirez back in the first inning.

"I actually heard Wainwright say, 'Hey, my bad,'" Dodgers manager Don Mattingly said. "You're not going to win anything with the macho thing on the field."

Added Wainwright: "I just didn't want it to be a sideshow. Obviously you don't want to wake a sleeping dog, and I didn't want our team to lose its focus. I tried to clear the air there."

The Cardinals went on to win the NLDS opener10-9.

"I know they're upset at what happened last year and this year they don't want the same," Molina said. "Obviously they're upset about it, but at the same time, if you're upset, you can't scream at it. You've got to have some respect, too."