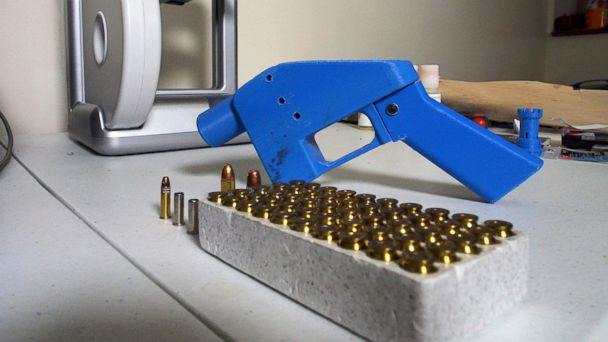 A would-be assassin out to kill a U.S. president builds a gun out of composite materials and hides bullets in his metal, rabbit's foot keychain as he glides through a metal detector.

He then reassembles the pieces and reconstructs the gun while sitting at a table at a political fundraiser.

He approaches the president and pulls the trigger.

Only Clint Eastwood leaping in front of the bullet saves the fictitious president.

The crowning moment in the 1993 hit film "In the Line of Fire" involved the John Malkovich's villain putting together an untraceable gun, and now, lawmakers are trying to make that more difficult for others to do.

The current concern stems from a legal battle over guns that can be made using 3-D printers.

"Building guns out of materials that are undetectable by security screening devices is not necessarily a new concept, but in the past it required someone with specific skills who knew how to do it," said John Cohen, a former police officer and Homeland Security official who is currently an ABC News contributor.

"By putting these instructions on the internet you are dramatically expanding the number of people who could build these types of guns."

The 3-D printed guns are in the spotlight now because the U.S. State Department settled a multi-year court battle with a Texas-based company that was pushing to put downloadable instructions to build guns from 3-D printed pieces online. A federal judge intervened with a restraining order.

How the guns are made

The weapons at the center of the legal firestorm are ones that are printed out in parts and then constructed by the user.

Specialized printers are able to print out three-dimensional objects built out of plastic or resin. By following instructions that have the specifications for a gun, the user can then print the various pieces and put those together like a 3-D puzzle. But for a "functional firearm," Cohen said.

"All it takes is for them to get the ammunition that you buy for any regular firearm and then start using it as a weapon," he said.

Much like guns themselves, the costs of 3-D printers range dramatically from hundreds to thousands of dollars.

The fact that these guns are printed at home and not by a licensed manufacturer who needs to keep records means that the weapons are untraceable in paper trails.

Beyond that, they are also undetectable by metal detectors, including those used at airports and at federal buildings.

The shifting aesthetic of 3-D guns, which are not necessarily black and could theoretically be any color, poses significant problems for law enforcement, Cohen said, noting that it might take longer for police to identify such a gun as a deadly weapon in a confrontational situation where every second counts.

"Depending on the appearance it could cause confusion when a police officer is trying to determine if someone is a deadly threat or not," he said.

The background checks required in many situations where people buy guns on the open market would not apply to those buying 3-D printers, which can be used for making numerous objects besides guns.