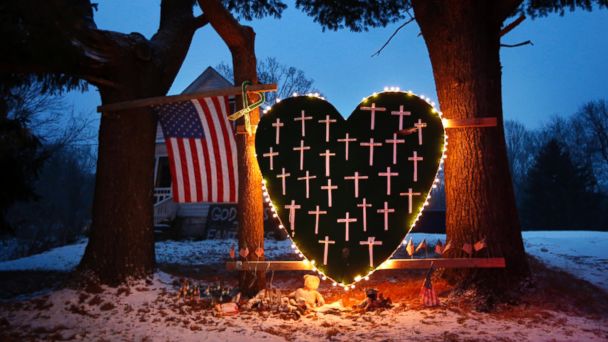 It's been two years since Nicole Hockley's son was murdered by Adam Lanza, the 20-year-old gunman who stormed into Sandy Hook Elementary School days before Christmas and killed 20 young children, six adult school employees and his own mother.

Some things are better now, while others have gotten worse, Hockley said.

"The second year is much harder than the first, as the shock wears out," Hockley told ABC News.

"Your denial becomes more of a reality, to be honest," she said, referring to the harsh stages of grief. "But there's also progress ... and taking small steps forward."

She and her husband Ian have since bought a new house in Newtown, Connecticut. At the time of the shooting, they were renting a place across the street from where Lanza lived with his mother, Nancy -- another one of Adam Lanza's victims that day.

"We definitely didn't want to be in that house anymore," Hockley said. "We're still in the same neighborhood."

In two years, memorials have come and gone, the city has taken possession of the Lanza home in a deal with the Hudson City Savings Bank, and the school, the scene of the bloodshed, has been demolished.

A new Sandy Hook Elementary school will open in 2016.

"I will usually go out of my way not to drive by where the school used to be," Hockley said.

Hockley and her husband considered moving, she said, but Hockley realized they would be leaving Newtown for the wrong reasons.

"It's a topic of conversation my husband and I have once a month or so," she said. "If we move, it would have to be because we wanted to move, not because we were running away. That's just not going to happen."

For the families of the victims, many milestones have passed since Dec. 14, 2012. Erica Lafferty, whose mother was the school principal and one of the adults Lanza killed, got married last year. Francine and David Wheeler, who lost their 6-year-old son in the shooting, had another baby in November.

Hockley, too, is focused on another child: Jake, her 10-year-old son, who's learning to cope with Dylan's death.

"He's still in therapy and likely to be for a long time," she said. "He's a resilient kid. He's happy to an extent. He misses his little brother."

"He's seen the worst of what can be out there," Hockley added. "He used to be afraid of things that are not real. Now he knows what real monsters are. It's something we talk about a lot in our house."

She said Jake has struggled in school since the shooting.

"His grades have fallen dramatically," Hockley said. "We've heard through therapists that this is a problem -- math and science -- because PTSD effects memory."

Joseph Erardi, Newtown's school superintendent, said federal grants and local support have helped the schools launch impressive counseling services for staff and students. On Friday, he sent a letter to staff, reminding them to "extend your hand and your heart to someone in need during this sensitive time."

Some students might be just starting to feel the effects of the shooting.

"The second year is probably more complex than the first year in terms of rebuilding and recovery," Erardi told ABC News. "I think people run on adrenaline that first year."

Arguably, Hockley still is. Last year, she transitioned from her role as a stay-at-home mom to a full-time employee of Sandy Hook Promise, a nonprofit group that aims to protect children from gun violence.

The organization recently released a short film called "What They Left Behind," which chronicles the stories of three children who died in a shooting.

"Trying to fix gun violence is not a quick solution," said Hockley, who has dedicated her life to the cause. "It's about education and awareness. It's about changing the way people think."