'Had it. Lost it.': The Warriors and the elusive quest for joy 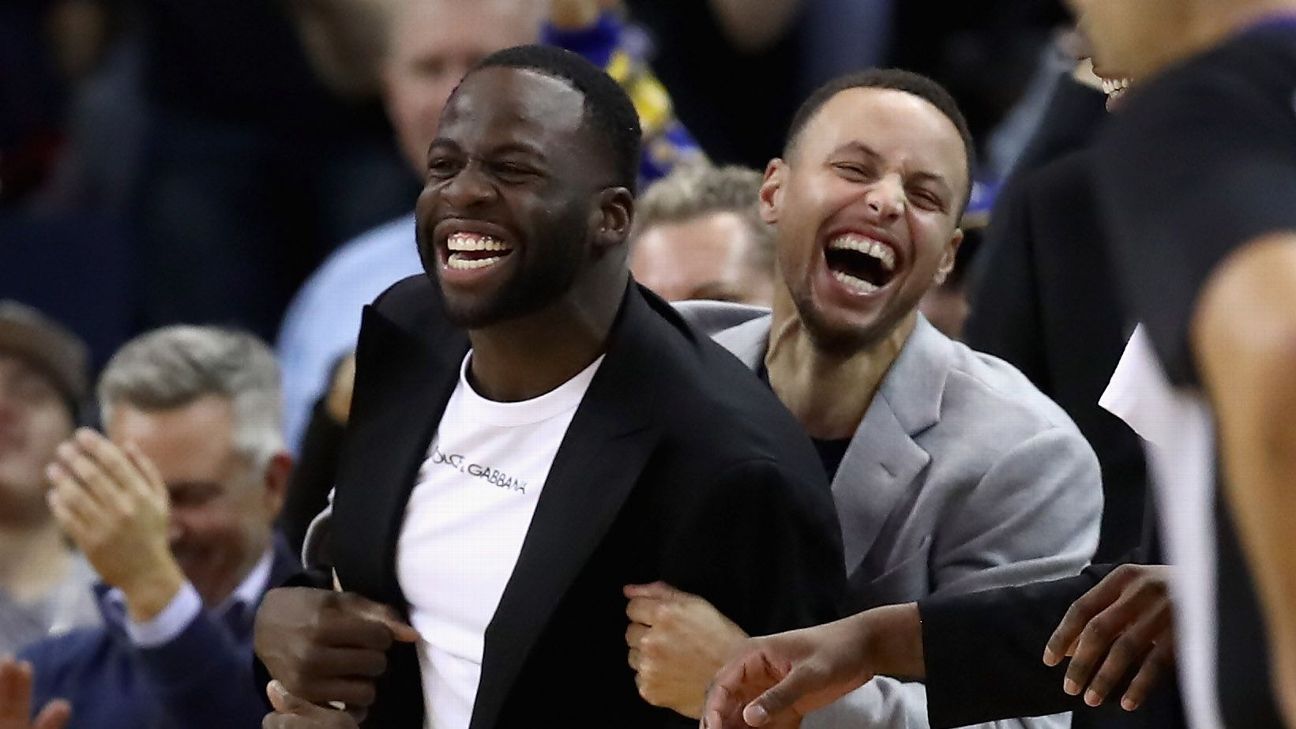 ESPN
By Nick Friedell
The Golden State Warriors are searching for one of the most elusive properties in sports. What they are looking for is not as tangible as a third consecutive Larry O'Brien Trophy. It's a feeling that has defined the high points of their dynasty but has been missing in recent weeks because of self-inflicted drama that has sapped the proud group of one of the most valuable commodities in basketball:

"I feel like a lot of people confuse joy and happiness," Warriors forward Kevin Durant told ESPN. "I think happiness is a feeling that it's fleeting. It means you can go back and forth all the time. I feel like joy is something that you can stand on. And when you're enjoying what you do, you don't mind the adversity, the tough times, the challenges. The little obstacles you got to climb to get to where you want to go. I think joy is something that we can always hold onto."

The Warriors have been able to maintain their edge over the past four years -- and were able to weather the storm that came in the wake of emotional words between Durant and Draymond Green during and following a loss to the LA Clippers last month -- in part because of the effort this group puts into both teaching and practicing the art of joy on a daily basis.

"Every team that I've been on has an atmosphere, a culture," coach Steve Kerr said. "You walk into the building and how do you feel? And that's important. So our job as a coaching staff, and as an organization, is to make this a really great place to work. And the players' job is to come in and get their work in. And if we can all together make that a fun proposition, an enjoyable one, then you got an atmosphere that you enjoy every day."

The Warriors came into the season filled with the kind of joy that has carried them to back-to-back titles. Kerr beamed at how different the group felt at the beginning of this season compared to the same point last year, when a long preseason trip to China led to a sluggish start to the regular season.

"We feel fresher this year," Kerr said after a win over the New Orleans Pelicans on Oct. 31. "Last year I know a couple guys told us Game 1 felt like Game 41. This year Game 1 felt like Game 1. It felt like it was supposed to feel, and we're off to an excellent start. We know we can get better, but I think our guys are in a good place."

Green echoed those sentiments, and smiles permeated the locker room as the Warriors rolled to a 10-1 start.

"We came into this season excited about the season," Green said at the time. "Really looking forward to getting better each and every time we stepped on the floor. And I think, for the most part, we've done that. And it's a lot more enjoyable. We're embracing this process, getting better and trying to win a championship."

But the Warriors' embrace of the season-long process -- one Green said the team skipped last season, before flipping the switch in the playoffs -- was derailed early.

Star point guard Stephen Curry missed 11 games because of an injured left groin. More important, because of the injury, he was not in Los Angeles the night tempers flared between Durant and Green. Then, after a win over the Atlanta Hawks on Nov. 13, one which Green missed because he was suspended for "conduct detrimental to the team" after his feud with Durant, the Warriors proceeded to lose four straight games for the first time in the Kerr era.

In the blink of an eye, all the joy the Warriors had built up to start the season was gone.

"It's not guaranteed, that's for sure," said Kerr, while discussing the elusiveness of joy. "That's why we work on it, we try to. It's hard to work on joy, but it's the tone we've tried to set for the last five years. For the most part we've achieved that. We're going through kind of a perfect storm of injuries and scheduling and just the internal stuff. Right now, you don't take a lot of joy out of losing."

In the midst of all the questions surrounding the present and future, Kerr remained confident his team could still win even if there wasn't a lot of happiness behind the scenes.

"That's a hard question to answer because it depends what's going on," Kerr said. "But we can. We have guys who love playing the game, and they're really high-character people, they're going to fight. So we'll find our joy again."

After a recent practice, Klay Thompson sat on the floor of the Warriors' practice facility watching rehabbing All-Star center DeMarcus Cousins take part in a 2-on-2 game. As Thompson listened to a question about the Warriors' search for joy, the 28-year-old shook his head.

"Obviously this is unfamiliar territory with our team," Thompson added. "It's been a while since we've been on a losing streak like this, but at the end of the day it's not the end of the world. We still play basketball for a living and make people happy, so it's pretty easy to find joy in that."

Veteran swingman Andre Iguodala, who has been in the league longer than any Golden State player, joined Kerr in being convinced his team would find its way through the rocky times.

"It's funny because when you're in a winning environment and you lose like two or three games, it's almost like the end of the world, which is crazy," Iguodala said. "And you're on another team, you're young, you're competing, you lose three games in a row you're like, 'Man, I can't wait to get back out there tomorrow night.' You're happy to go to practice -- and then you get a win, it's like a championship. It's funny here because you don't want to say it, but it's true as far as you're spoiling people. People get spoiled."

In his 14th season in the league, veteran point guard Shaun Livingston might have summed it up best: "Happiness can be fleeting. It can be temporary. ... But joy is kind of long-lasting. It's a spirit that's inside you."

Curry is the embodiment of the Warriors' spirit of joy. The two-time MVP is not only the centerpiece of everything they do on and off the floor, he is also the spark plug of energy that his teammates feed off of each night.

"It just helps to have him on the court, just to kind of keep the energy going," Livingston said. "Keeps us positive. Keeps our body language up. That's the way that he plays, doesn't get down on himself. And that helps the rest of the guys just to keep playing."

For Curry, being responsible for that kind of presence is something in which he takes a great deal of pride.

"Very important for what I do and how I play," Curry told ESPN of bringing joy. "That's part of how I've always approached the game is just having fun and putting a smile on my face. And I think that's contagious and part of the culture we've created here. It's the easiest thing I can do in terms of be myself and just have fun. And hopefully people feed off that energy."

Though the Warriors dropped Curry's first game back from injury -- a Dec. 1 loss to the Detroit Pistons-- they've looked much more like themselves in recent wins over the Hawks,Cleveland Cavaliersand Milwaukee Bucks, with Curry averaging more than 30 points in the three wins. Beyond providing that scoring punch, Curry knows he has the power to pull the best out of his teammates, and it's a responsibility he doesn't take lightly.

"At the end of the day, you have to be very purposeful and reminding yourself what you're doing for a living," he said. "We should take everything seriously, the highs and the lows and whatnot, but if we can somehow keep that the most consistent thing that we do and just have fun playing, you can weather the storm."

After watching Durant go off for 51 points in an overtime loss to the Toronto Raptors on Nov. 29 -- Durant's third consecutive game scoring more than 40 points -- Green seemed just as impressed as anyone else. As the pair got dressed near each other in the locker room while exchanging some pleasantries, Green, the emotional engine of the team, affirmed just how crucial the collective joy was to the Warriors' success.

"The season gets long," he said. "Days when you don't feel like doing it. Sometimes it gets redundant. It's tough. So it's very important to have that joy. It's really like enjoying what you're doing, because if you don't have that joy and everything's a drag it's also going to have an effect on your game."

It was in this moment, after a loss, when it seemed the Warriors knew everything was back in order. Instead of moping around in a funk as they had done through most of their losing streak, players walked around with a confidence, knowing they had almost beaten the Eastern Conference's best team without key pieces like Green and Curry. Despite all the turmoil, Durant remained buoyed by the belief that things would turn around in due time, echoing the sentiments of Thompson and Iguodala about keeping things in perspective.

"Losing basketball games, it's not the end of the world," he said. "And we have a long season ahead of us to figure it out. But when you're in that storm, it's tough. But you know [the tough times are] going to be over at some point, so I think that's something that we all held onto."

Added Durant: "I feel like a lot of people might have [joy] confused with just like smiling all the time and just like jumping up and down. That's not a feeling that we always have."

The seeds Kerr planted along the way were ingrained deep enough in his team to weather the storm. Now, with Curry back, Green expected to follow next week and Cousins lurking in the future, the team appears to have found what it was searching for.

"The thing about professional sports I've learned is that it's not all glorious," Thompson said. "There's a reason you pour champagne when you accomplish the ultimate goal because you realize how hard that journey is, man. It wouldn't be worth it if it wasn't so hard. To the common fan, to the naked eye, it looks like we haven't really struggled these past three, four years as much as people would think. But every day it's something new, and that's life. Nothing's worth it if there's not some bumps along the road."