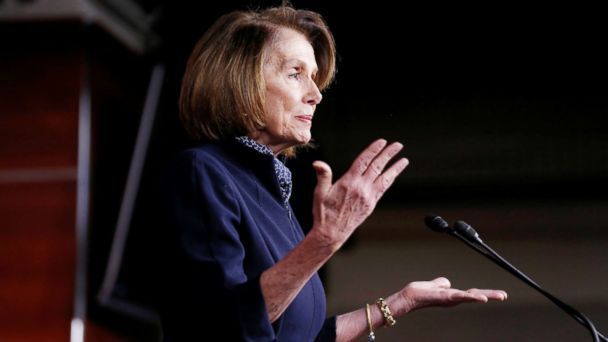 As a partial government shutdown looms, House Minority Leader Nancy Pelosi flatly dismissed President Donald Trump's demands for $5 billion towards a border wall, scoffed at his claim that Mexico is implicitly paying for the wall as a result of the renegotiated trade agreement and revealed that she told him on Tuesday, after a public confrontation at the White House, that she is praying for him.

Flexing her muscles as she attempts to reassume the speakership in the next Congress, Pelosi said Thursday that the impasse over the border wall is likely to result in a long-term continuing resolution for all the appropriations that lawmakers have not agreed to fund yet.

"[Republicans] do not have the votes to pass the president's proposal -- $5 billion dollars, whatever it is -- for the wall," Pelosi said. "Nothing is going to change in that regard."

Trump met with Pelosi and Senate Minority Leader Chuck Schumer on Tuesday in the Oval Office and they publicly sparred over the border wall funding.

"You said 'I will shut down the government if I don't get my wall,'" Schumer said to Trump.

The president shot back, "I am proud to shut down the government for border security, Chuck. People in this country don't want criminals and people that have lots of problems and drugs pouring into our country. I will take the mantle. I will be the one to shut it down. I won't blame you for it. The last time, you shut it down. It didn't work. I will take the mantle of shutting it down.

"I'm going to shut it down for border security."

On Thursday, Pelosi said that following the wild exchange, she told the president in private that she is praying for him. She also revealed that she hasn't spoken to Trump since he called Tuesday to follow up after the meeting.

Earlier Thursday, Trump tweeted, that "just by the money we save, MEXICO IS PAYING FOR THE WALL."

"He said that, but it doesn't make any sense," Pelosi, D-California, said. "The American people are still paying the price. Mexico is not paying for this wall. But maybe he doesn't understand how a trade agreement works for him to say such a thing."

"It's really unfortunate that the president has decided that he would shut down government at a time when the markets are in a mood, where people are losing their jobs in some industries. The auto industry, for one, where there's uncertainty in terms of the financial security of America's working families," she said. "That's a drastic thing for him to do, especially as we leave the Congress for the holidays because that means it would be shut down for a while."

Lawmakers must come to terms by the end of the day Friday, Dec. 21 or there will be a partial government shutdown. Without a deal, up to 420,000 federal employees would be faced to work without pay and more than 380,000 others would face furloughs.

If there is a shutdown, Pelosi promised that House Democrats would vote in January to reopen government, which she conceded is little consolation to federal employees working paycheck-to-paycheck.

"[Trump's] taking full responsibility for the Trump shut down," Pelosi said. "Perhaps he doesn't understand people need their paychecks. Maybe that's not the life he leads."

"It's not enough to say we'll pay you in January when people have to make ends meet in December. Of course if he went down that path as soon as we took over the Congress we would pass legislation to open up government and send it to the Senate and we think it would then go to his desk. But we don't want to have to go to that place."

"I don't know why we just don't proceed to keep government open so that people can be home for the holidays and enjoying all of that," she added.

Pelosi said that Democrats are essentially waiting for Republicans to bring them back into negotiations.

"Let's hope that there won't be a shutdown of government. That's a very bad thing to do and maybe the president doesn't grasp that but that is very harmful to our country," she said. "The only obstacle is the president of the United States."

The House of Representatives has adjourned until Wednesday, though appropriators are expected to continue negotiations throughout the weekend.
Report a correction or typo
Related topics:
abc newsnational
Copyright © 2021 ABC News Internet Ventures.
More Videos
From CNN Newsource affiliates
TOP STORIES