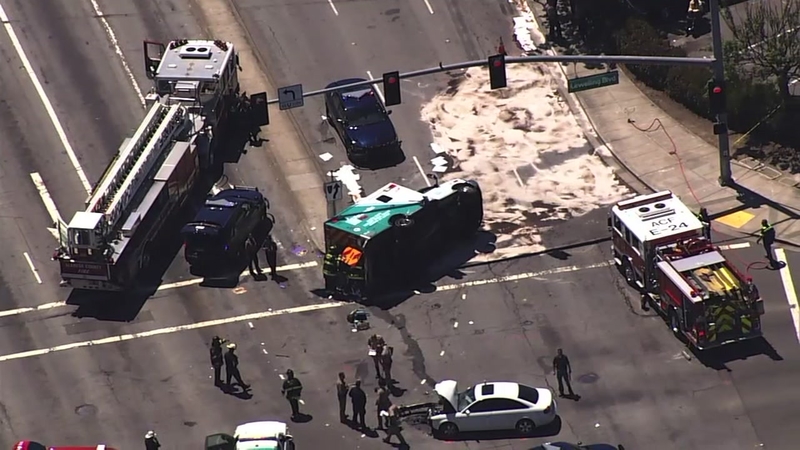 SAN LORENZO, Calif. (KGO) -- Officials say 74-year-old Catherine died after a frightening crash in the East Bay between a car and the ambulance taking her to a hospital on Monday..

SKY7 spotted the ambulance on its side at 11 a.m. at the intersection of Hesperian and Lewelling boulevards in San Lorenzo.

The Paramedics Plus ambulance was headed south on Hesperian with Catherine in the back. CHP spokesman Officer Dan Jacowitz said he did not know if the ambulance was driving with its lights and sirens activated.

According to Jacowitz, the driver of a white Audi sedan was headed east on Lewelling and slammed into the side of the ambulance when it was in the intersection, tipping it on its left side.

All five patients were taken to Eden Medical Center in Castro Valley.

CHP investigators said she was being worked on by EMT's in an emergency capacity when the crash occurred.

The Audi's driver suffered what were described as moderate to major injuries. The driver and an EMT in the ambulance were okay.

The CHP is investigating the crash with the assistance of the Alameda County Sheriff's Office.