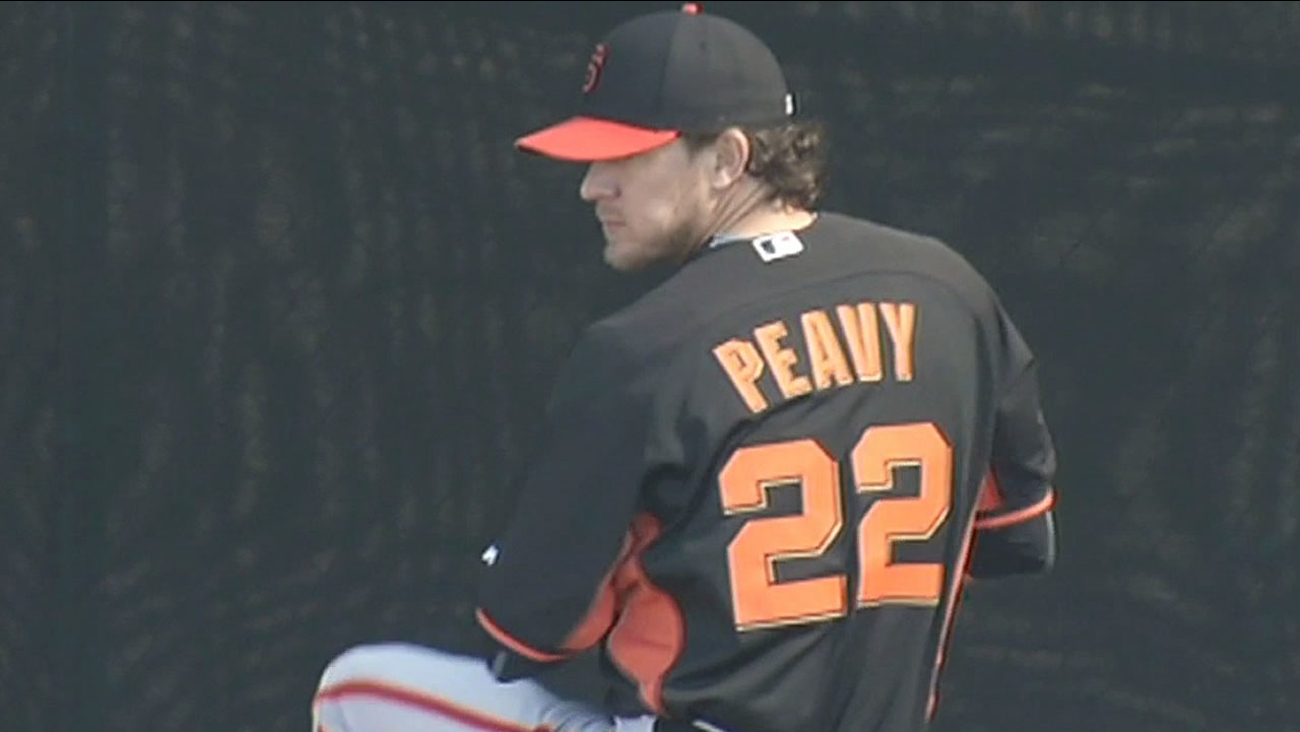 SAN FRANCISCO (KGO) -- The San Francisco Giants host the Oakland A's on Wednesday and Jake Peavy will get the start. Peavy joined the Giants from Boston late last year and has played on back-to-back World Series champion teams. This year, he's hoping now to make it three in a row.

Peavy won back-to-back World Series with the Red Sox and Giants and had options to go elsewhere this off season. He and manager Bruce Bochy were together in San Diego so that helped, but Peavy loves this Giants' clubhouse.

"A great place to be, great group of guys here, and obviously with the tradition, and what these guys have been doing, and to get to be a part of last year was special," Peavy said.

The pitching staff has been the strength of the past three World Series teams. But there are several question marks this year with Matt Cain's elbow, Tim Hudson's ankle and Tim Lincecum's mechanics. Peavy doesn't seem concerned.

"We have some depth, we have some experience. I think this is the biggest thing that people aren't accounting for, yeah, we have question marks and we're older, but along with that comes a lot of experience and a lot of believe in one another," Peavy said.

Starter Ryan Vogelsong was resigned as insurance, but will probably start the season in the bullpen.

"I know that he's going to do whatever he can possibly do to help this team, whether it be a starting role or a bullpen role. That's the beautiful thing about playing here, everybody checks their ego at the door and will do whatever is asked of them to be the best team," Peavy said.

Peavy is at a point in his career where he's transitioning from being a flame thrower to becoming a craftier pitcher.

"Yeah, you don't ever stop growing and evolving, and your stuff does start to decline a little bit and it's not maybe what it once was, you certainly have to use your head and play smarter. We always say that all the time. There's no reason to be prideful in a situation," Peavy said.
Related topics:
sportssan franciscoworld seriessan francisco giantsmlbbaseballspring trainingboston red sox
Copyright © 2021 KGO-TV. All Rights Reserved.
RELATED
Giants' Tim Lincecum turns to father for pitching help
Buster Posey wins the 'Face of MLB' contest
EXCLUSIVE: How does Zito feel being back with the A's?
PHOTOS: San Francisco Giants Spring Training 2015
TOP STORIES
How new SF legislation could reduce organized retail theft
53 cases of new R.1 COVID variant detected in CA
Several Bay Area restaurants honored in 2021 Michelin Guide
Person of interest detained after threat made to SFSU
Mountain lion spotted in backyard of Daly City home
CA residents in high fire risk areas priced out of insurance policies
Our America Equity Report
Show More
Gabby Petito's family speaks as FBI manhunt continues
CA's rise in homicides part of nationwide spike, data shows
Powerball: No winner, jackpot soars to $570 million
EXCLUSIVE: SJ man warns others after being harassed over dinosaur flag
How CA leaders hope to improve vaccine rates in Black communities
More TOP STORIES News