KGO
By Lyanne Melendez
SAN FRANCISCO (KGO) -- A group of Black leaders in San Francisco said they wanted to put an end to the myth that only white people are in favor of keeping the controversial mural at George Washington High School. Some say the series of panels depicts Native Americans and African Americans in a negative light.

Led by the head of the NAACP, Amos Brown, they insist that removing them would lead to whitewashing history.

The debate over the mural titled "Life of Washington" followed an even greater divisive path Tuesday after a group of Black leaders voiced their support for the body of work.

"We must face our past sins and make amends for them by being reminded," expressed Amos Brown, President of the NAACP, San Francisco Chapter.

The artist wanted to remind students that as the dead body of a Native American man was lying face down, his land was taken from him.

Arianna Antone Ramirez is with the American Indian Cultural Center of San Francisco.

"We are always portrayed in the media, in murals, in school we are portrayed as dead or as if we didn't exist or as costumes," said Antone-Ramirez.

In 1974 Dewey Crumpler created another mural at the school called "Multi-Ethnic Heritage" in response to the original one. Today he defended Victor Arnautoff's work.

"Art's role, if it's any good, in anytime in the world is to make us uncomfortable with the status quo so that we can be about the business of change," explained Crumpler.

So when these civil rights leaders talked about the dangers of whitewashing history, we decided to visit the Jewish Family and Children's Services Holocaust Center. The center now documents the testimonies of survivors.

Supporters of the mural say they will begin a city-wide petition if the school board does not change its mind.
Report a correction or typo
Related topics:
educationsan franciscoartdebatesocietyhistorycontroversial artracismpoliticsmural arts
Copyright © 2020 KGO-TV. All Rights Reserved.
RELATED
Future of controversial murals at SF high school in hands of school board
Should SF schools with names tied to slavery be changed? 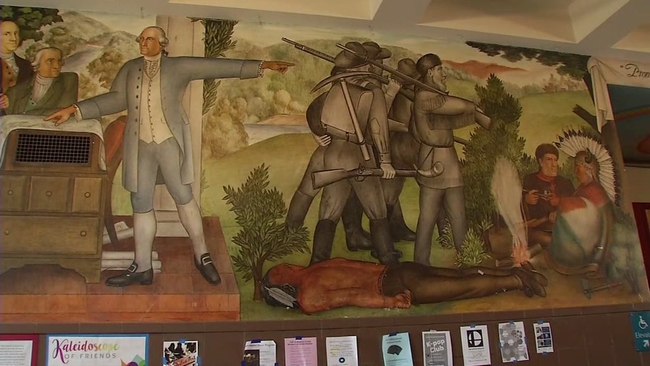