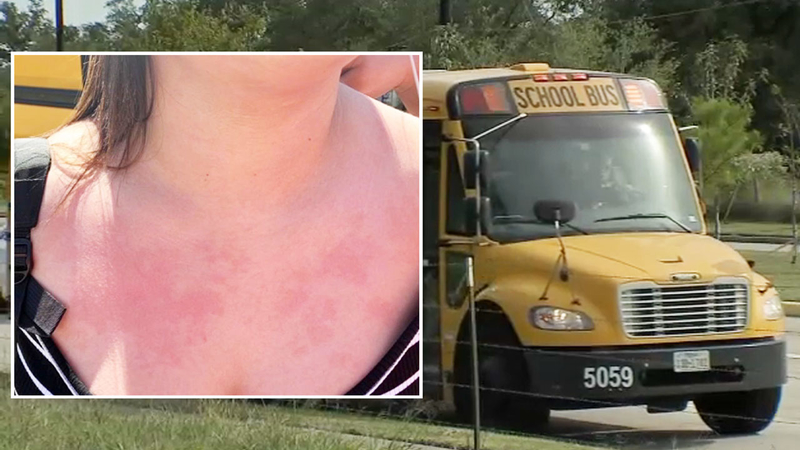 Katy teen left with nightmares after attack on bus

KATY, Texas -- A Texas teenager is left shaken after she says she was repeatedly punched on the school bus.

The Katy High School student said the incident left her so distraught, she's had nightmares.

A teen appears to repeatedly raise her arm and punch someone in the back of the school bus.

Michell Carvajal, a Venezuelan refugee, says she was the one that was hit and claims the girl who hit her had been bullying her.

"She would say, like, 'Go back to your country. Speak English,'" said Michell. "'We don't want you here, if you're going to be here talk in English.'"

Michell says the girl started something with her friend, who was speaking Spanish.

"I told her, 'What is your problem? You don't have to be rude just because we're Latino. We have the same rights as you,'" she said. "That's when she started hitting me."

Michell says she was left with bruises and bumps on her head but, it's the emotional wounds that are still healing.

Friday was the first time Michell took the bus since the incident happened two weeks ago. She said she was nervous.

"I was shaking. I was sweating," she said.

Katy ISD says the student involved has been punished.

The District is aware of the report concerning an allegation of an assault on a Katy ISD school bus. Katy ISD campus administration and police immediately investigated and administered disciplinary consequences pertaining to that report. While FERPA protects the privacy of students involved in both open and closed investigations, campus and District staff take great care in ensuring families are well-informed about policy and procedures. Any concerns families have about investigations should be directed to their campus, school district or Katy ISD police.