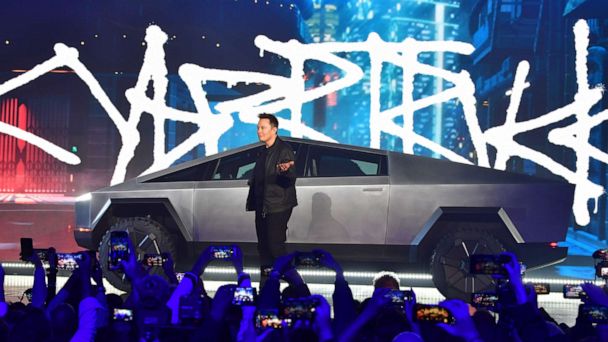 It looks a little like a Mars rover, or a stainless steel triangle on wheels.

But it is definitely like no other pickup truck you've seen before. And it lit up social media late Thursday during its unveiling with some deriding it as ugly -- and others loving its futuristic style.

Tesla founder Elon Musk unveiled the Cybertruck, the company's new pickup, at a typically grand event and is already letting consumers sign up to buy and put down deposits on it even though the Cybertruck won't be on the road until late 2021.

In 2012, Musk mentioned he wanted to one day build a pickup truck. That day has come.

"It''s ultra-hard, cold-rolled, stainless steel alloy that we've developed," Musk told invited guests at the reveal at the Tesla Design Center in Hawthorne, California. "We going to be using the same alloy in the Starship rocket."

But when Musk invited Tesla's chief designer Franz von Holzhausen to toss a metal ball at the vehicle's windows, what happened next did not go as planned: a window shattered. Von Holzhausen tried again. Same result.

A stunned Musk stood on stage in disbelief.

Musk claims the Cybertruck will be able to tow 14,000 pounds, even outperforming an F-150 in a tug-of-war contest.

Musk promised his truck will get between 250 and 500 miles per charge and will go 0 to 60 mph in an unparalleled 2.9 seconds. Performance will be based on the model chosen. Plus, there will be an optional all-terrain vehicle that can be charged by loading it into the back of the Cybertruck.