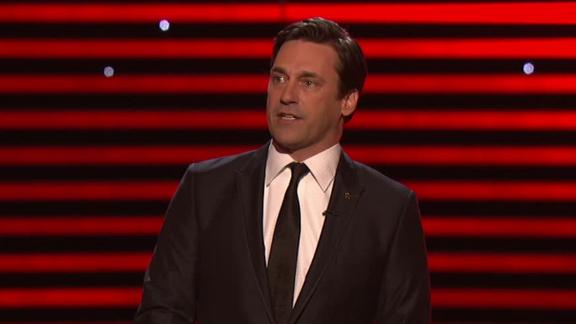 Just like he did with the Miami Heat, LeBron James went back-to-back at the ESPYS.

"To be in a category with All-Day AP, the Triple-Crown winner, and the human fish, it's an honor," said James, who won his fourth NBA MVP and second straight Finals MVP in leading the Heat to a franchise-record 66-16 record this past season.


"Just to be in a class with you guys is an unbelievable honor. This is for all four of us. I'm just going to keep it [the ESPY] at my house."


James also picked up an assist on the night, introducing Robin Roberts, who won the Arthur Ashe Courage Award, given to an individual whose contributions transcend sports.


One of the first female sports anchors on ESPN in the 1990s, Roberts has worked with ABC's "Good Morning America" for the past two decades, blazing a trail for women in broadcasting.


Her personal journey also served as inspiration because she overcame life-threatening illnesses twice.


"When fear knocks, answer the door," Roberts told the audience at the Nokia Theatre, before adding, "At this moment I'm filled with such gratitude."


And the speech touched many, including tennis champion Venus Williams, who on Twitter wrote:

I loved @RobinRoberts speech, so eloquent and heart heart felt, I was hanging on to every word. Best moment of the #ESPY

The champion Heat, meanwhile, were saluted with the ESPY for Best Team for the second straight year and got the nod for Best Game thanks to their Game 6 comeback victory in the NBA Finals against the San Antonio Spurs.


Peterson won the Best Comeback award after rushing for 2,097 rushing yards last season, second-most in NFL history, just nine months after surgery for a torn ACL. Cabrera won the ESPY for Best MLB Player after becoming the first Triple Crown winner (.330 average, 44 home runs, 139 RBIs) since 1967 and winning the American League MVP. And Phelps, who completed his career in the pool with more gold medals (18) and overall medals (22) than any other Olympian, bagged ESPYS for Best Male U.S. Olympian and Best Record-Breaking Performance.


Fan voting, conducted online, was based on performances spanning the past 12 months.


The awards show, which celebrates the year's best athletes and moments in sports, was hosted by "Mad Men" star Jon Hamm, who took shots at some of the world's top athletes in his opening monologue.


On Dwight Howard, who recently bolted the Los Angeles Lakers for the Houston Rockets via free agency, he said, "He's leaving L.A. I guess he finally found a way to help the Lakers win."

Hamm then added: "We thought it would be nice to honor Dwight Howard with his greatest moments with the Lakers," before no film clips appeared on the screen behind him while the crowd laughed.


And on New York Yankees slugger Alex Rodriguez, whose name has been linked to the Biogenesis scandal, Hamm said, "There are rumors that MLB is going to suspend A-Rod after the All-Star break. But that's OK; Yankees fans are used to him not showing up in the second half."


Serena Williams won ESPYS for Best Female Athlete and Best Female Tennis Player after a year in which she hoisted championship trophies at the 2012 U.S. Open and 2013 French Open, as well as singles and doubles crowns at the London Olympics.


And the father-and-son team of Dick and Rick Hoyt, who have participated in more than 1,000 endurance events, including 31 Boston Marathons, were honored with the Jimmy V Perseverance Award.


The award is given in honor of late NC State basketball coach Jim Valvano, who inspired millions with his courageous battle against cancer in 1993.


Rick Hoyt, 51, was born with cerebral palsy and is unable to use his hands and legs. His father, 73, pushes him in a custom-made running chair during events, including 5K and 10K races, marathons and triathlons. They were presented the award by actor-director Ben Affleck, a fellow Boston native.


"I don't think you could find two guys more proud to represent the city of Boston," Dick Hoyt said.


Several athletes took to Twitter after the Hoyts accepted the award, such as Carolina Panthers tight end Greg Olsen.

If I become half the father Mr Hoyt is ill be thrilled. That was one of most amazing stories of father/son love I have ever heard #espys


Best Breakthrough Athlete: Quarterback Colin Kaepernick, who started the NFL season on the sidelines before helping the San Francisco 49ers to a spot in the Super Bowl.


Best Upset: Florida Gulf Coast, which became the first No. 15 seed to advance to the Sweet 16 in the NCAA men's basketball tournament.


Best Moment: Jack Hoffman, the 7-year-old Nebraska Cornhuskers fan battling brain cancer who broke off a fourth-quarter touchdown run during the team's spring game. As his father spoke after accepting the award, Jack held the big trophy that blocked part of his face.


Best Coach/Manager: Rick Pitino, the Hall of Famer who became the first coach to win national titles at two different schools by leading Louisville past Michigan in the Division I men's basketball final.


Best NHL Player: Sidney Crosby, who led the Pittsburgh Penguins to the top record in the Eastern Conference in 2013 with 56 points (third most in league) and 41 assists (second).


Best Male College Athlete: Johnny Manziel, the Heisman Trophy-winning quarterback out of Texas A&M, who became the first freshman in Football Bowl Subdivision history -- and just the fifth player ever -- to have 3,000 passing yards and 1,000 rushing yards in a single season.


Best Female College Athlete: Brittney Griner, the former Baylor center who wrapped up her stellar career as the NCAA's career leader in blocked shots (748) and finished second all time in career points (3,283).

Best Male Golfer: Tiger Woods, who reclaimed the No. 1 ranking in the world and has a PGA Tour-high four victories so far in 2013.


Best Male Tennis Player: Novak Djokovic, the top-ranked player in the world who won the Australian Open for the third consecutive time in January.


Best Fighter: Floyd Mayweather Jr., who returned to the ring after a year's absence to notch a unanimous-decision victory against Robert Guerrero to improve to 44-0.


Best International Athlete: Usain Bolt, the Jamaican sprinter who raced off with three gold medals at the London Games and became the first back-to-back 100-meter winner since Carl Lewis (1984, '88).


Best MLS Player: Thierry Henry, who helped the Red Bulls reach the playoffs with 15 goals and 12 assists in just 25 matches.


Best Driver: Ryan Hunter-Reay, who became the first American to win the IndyCar Series title since 2012.


Best Jockey: Joel Rosario, who rode Orb to a win at the Kentucky Derby.


Best Male Athlete with Disability: Jeremy Campbell, who set a Paralympic record in the discus and broke the world record in the event at the Triton Invitational.

Robin Roberts' Journey
Take a look back at Robin Roberts' journey as a pioneer in sports broadcasting to overcoming some of life's toughest obstacles.