The Embarrassing Thing That Happened to One Russian Tank 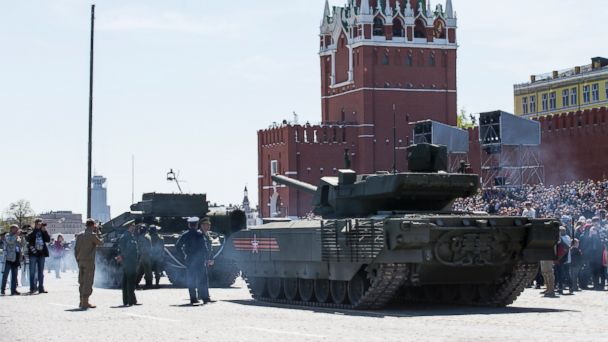 One of Russia's new, state-of-the-art Armata T-14 tanks broke down in Red Square today during a rehearsal for a World War II anniversary parade in Moscow.

The Armata, which has been described by Russia and some Western military experts as the most advanced tanks in the world, rolled to halt in the middle of the square in front of the Kremlin, while the parade continued on past it.

Videos taken by spectators showed soldiers attempting to tow the tank, while hundreds of troops in dress uniforms attempted to continue maneuvers around it.

The Armata is one of the flagship projects in Russia's multi-billion dollar revamping of its armed forces.

Equipped with a unique remote-control turret and automatic-weapons loading system, the Russian defense ministry has been trumpeting it since its unveiling last week.

The cause of the breakdown was not immediately clear, but the tank appeared to have stalled. After a significant interval, a test-driver for the tank succeeded in re-starting it and the Armata rolled away under its own power.

Russia is due to mark the 70th anniversary of the end of the Second World War this Saturday. As part of the event, hundreds of armored vehicles and thousands of soldiers will march through the city. The event is partly meant to showcase Russia's latest military hardware -- and the Armata is intended as a highlight of the parade.