75 years later, here's what we know about a mysterious Cold War plane crash in Marin Co. 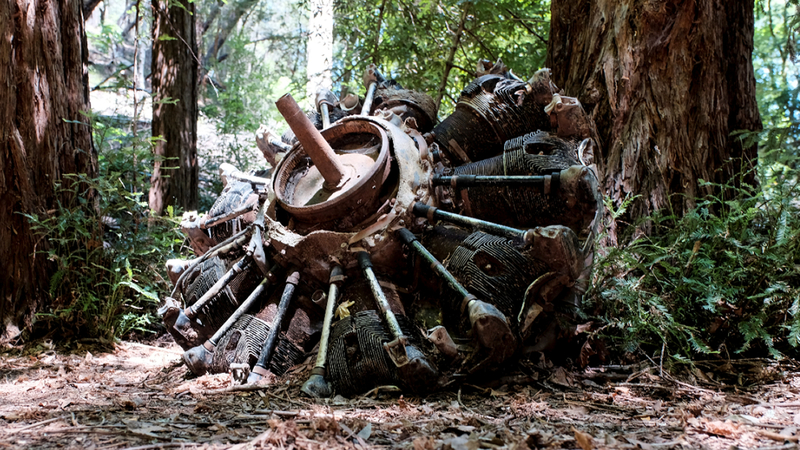 MARIN COUNTY, Calif. (KGO) -- Behind a gate and high up a hiking trail, in steep Marin County back country, an anniversary will come, go, and hardly anyone will observe.

It was a Cold War accident that arrived in early morning darkness from the sky. But, Gary Peak remembers.

"They had no idea they were lost. Thought they were flying over San Francisco Bay," Peak said.

75 years ago, Sunday, May 16, an army B-17 with nine aboard crashed into White's Hill while flying to Hamilton Field, killing three. Peak knows more about what happened than maybe anyone. He once interviewed Joseph Rincon, the navigator.

"He talked about how, eight feet higher, they would have made it. How the pilot pulled up. When it crashed, he went through the plexiglass," Peak told us.

The USS Coral Sea was one of the three Midway-class aircraft carriers from the United States Navy introduced in the latter part of World War II. It had a home in the Bay Area for nearly 15 years.

Rincon would spent 71 days in the hospital recovering from a broken skull, two broken legs and a broken jaw. Hike the hills long enough, you might even find parts of the plane---a piece of aluminum here or there.

But there is one large remnant lying against a tree in a quiet redwood grove. It's one of the four, large radial engines.

"You can see the whole thing is banged up," pointed Marin County Parks Ranger Mike Warner. He's the other expert.

"They were on a flight from Clovis, New Mexico and made stops in Arizona and Los Angeles."

There, they were supposed to fill up on fuel, but didn't. Being out of gas probably saved lives because there was no fire.

"It had been a foggy night. The tower at Alameda Naval Air Station mistakenly thought the plane was over the Golden Gate, and instructed it to change heading and descend."

While human error played a role, Warner is more fascinated by how this this crash fit into the context of history.

World War II had ended. The Cold War had begun.

Joseph Stalin and the Soviet Union were still three years away from their first atomic test. America wanted to demonstrate its power.

Hence, the public testing of two bombs in the Bikini Atolls. The crash of that B-17 nearly kept it from happening.

"There is no written proof we know of but interviews with the crew stated they were carrying detonators for one of the devices at the Bikini Atoll test," said Warner.

Headlines in local newspapers never revealed anything beyond the bare facts, but for more than a week, White's Hill remained off limits while army investigators searched for and removed any classified material. Eventually, the army would bury much of that large plane on the spot, where it remains.

So, there is just the one large trace, now. An old radial engine that still has serial numbers, spark plugs, and if it could talk, a story to tell. After 75 years, a remnant of history, now part of the landscape.
"Hopefully, the engine is going to stay here," said Peak.

There could be no better resting place than a redwood grove.