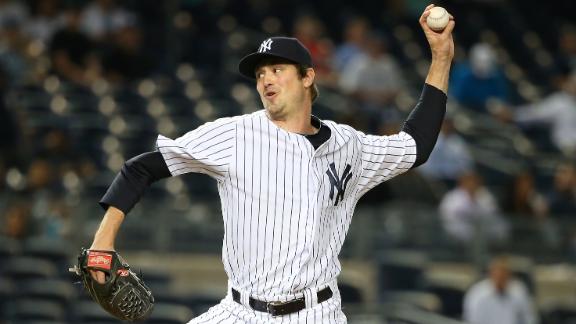 NEW YORK -- The Yankees have lost their closer, Andrew Miller, for a minimum of 15 days and probably longer than that with what the team described as a forearm strain.

The injury was announced by manager Joe Girardi on Wednesday after the Yankees lost to the Washington Nationals 5-4 in 11 innings at Yankee Stadium.

"He told us after the game [Tuesday] night," Girardi said. "I guess he's been experiencing it for a little bit, and he told us last night."

Miller, who is among the American League leaders in saves with 17, had given no previous indication of being injured and had gotten the final out in Tuesday's 6-1 Yankees win over the Nationals, retiring Wilson Ramos on a groundout on a 95 mph fastball at the end of a nine-pitch at-bat.

Miller underwent an MRI on Wednesday morning, which revealed a strain of the flexor mass, a muscle in the left forearm.

"I think that was the positive that came out from all of it," Miller said. "Structurally everything looks good; it's just a matter of calming down the muscle. The peace of mind is that a muscle strain is comparatively a much less serious situation [than a ligament tear]."

Miller said he would not pick up a baseball for 10-14 days, after which he will be re-evaluated and a further course of rehabilitation formulated. In his absence, Girardi said setup man Dellin Betances would be moved into the closer's role.

"To me, it's a fatigue issue," Miller said. "I noticed it was a little bit harder getting loose sometimes. It's just kind of been a grind. I've been trying to take care of it, trying to get treatment and do everything I can to get ready. It just got to the point where it was a little bit too much of a distraction."

Miller has appeared in 28 games this season and pitched 26 1/3 innings. He has converted all 17 of his save opportunities and did not allow an earned run until May 19, when in his 18th appearance of the season, he surrendered a two-run home run to Ryan Zimmerman that gave the Nationals an 8-6 walk-off win in 10 innings.

In his eight appearances since that game, Miller has allowed just one run and four hits, walked one and struck out 12 in eight innings pitched.

"Probably the most frustrating thing is I think it's pretty clear I've still been effective," Miller said. "I don't think my stuff has fallen off or anything but it's gotten to the point where unfortunately I'm sore and struggling to feel as good as I want to feel. I think that's probably a sign."

Girardi acknowledged that Miller's injury caused him to wonder if he had overused his closer this early in the season, especially after having used him in a non-save situation Tuesday, the night before Miller disclosed his discomfort to the team.

"I think you always look at what you've done," Girardi said. "You know I try to give them multiple days off when I can and try to keep them as fresh as possible. But you always go back. Most times you won't necessarily find a reason why. But you're always going to think about it and try to learn from it."

The Yankees signed Miller to a four-year, $36 million free-agent contract this year to replace David Robertson, who left via free agency and signed with the Chicago White Sox.