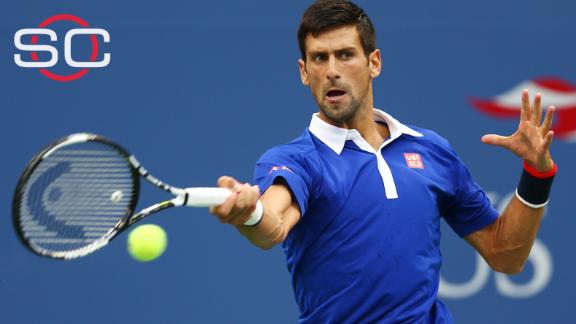 NEW YORK -- Unlike the women's tournament, which earlier Friday saw the shocking departure of its two top seeds in the semifinals, the tasty US Open men's final is the one (and two) many hoped for.

"He's had a tremendous year," Federer said afterward of Djokovic. "There's a lot on the line when we play each other. He's tough to beat. I like that challenge, and I'll be ready for it."

Federer, a five-time US Open champion (2004-08), will get another opportunity for a sixth after reaching his first final here in six years. At 34, Federer hasn't won a Grand Slam singles title in more than three years, at Wimbledon in 2012.

He would desperately like to add to his all-time total of 17 Grand Slam singles titles. It's worth noting that Djokovic has lost four of the five US Open finals in which he's played.

Federer leads the head-to-head with Djokovic 21-20 and won their most recent encounter three weeks ago in Cincinnati in straight sets.

But the slower courts here at the Billie Jean King National Tennis are more friendly to Djokovic's game. That advantage could be mitigated by the partial roof on Arthur Ashe Stadium, which drastically cuts down the swirling winds that Federer finds so annoying.

Against Wawrinka, Federer was close to flawless. The match was over in 92 minutes, with Federer avenging a straight-sets loss to the No. 5 seed in the French Open quarterfinals. His serve was unbroken.

Federer has won each of the 18 sets he's played here. How would he describe his form?

Federer leads the head-to-head with Wawrinka 17-3, including 12-0 on hard courts.

Meanwhile, Djokovic beat Cilic in 85 minutes, an outcome clearly accelerated by an ankle injury that Cilic carried into the match.

In terms of games, it was the most one-sided US Open men's semifinal in the Open era. Only Bjorn Borg's 6-1, 6-0, 6-1 victory over Corrado Barazzutti in the 1978 French Open featured fewer dropped games for the winner in an Open era Grand Slam.

"It's not easy knowing your opponent is not 100 percent," Djokovic said in his on-court interview. "Obviously, I executed the game plan."

Djokovic has won each of his 14 career matches against Cilic, taking 34 of 39 sets.

Cilic, 26, saw his 12-match winning streak here at the US Open come to an abrupt end.

He had spent more time on court than any of the semifinalists coming into the match. He looked weary and later admitted his movement was compromised.

While Serena Williams has been generating most of the headlines this season, Djokovic, 28, is very quietly compiling a sensational season. He's 62-5 for the year and could equal Williams' three major titles this year with a victory here on Sunday.

Djokovic hurried through the first set so quickly, he might have been mistaken for a New Yorker. The 6-0 frame ran all of 24 minutes, and it was only the second time this year Cilic has been bageled. The first? Earlier this year in Monte Carlo, also to Djokovic.

Djokovic, the best men's player on hard courts for the past five years, reached his 16th final in the past 21 majors, going back to the 2010 US Open.

And, for the first time in his career, he's reached all four major finals in a year.

"Of course it's a great achievement, and I'm very proud of it," Djokovic said. "These are the tournaments where you want to perform your best."