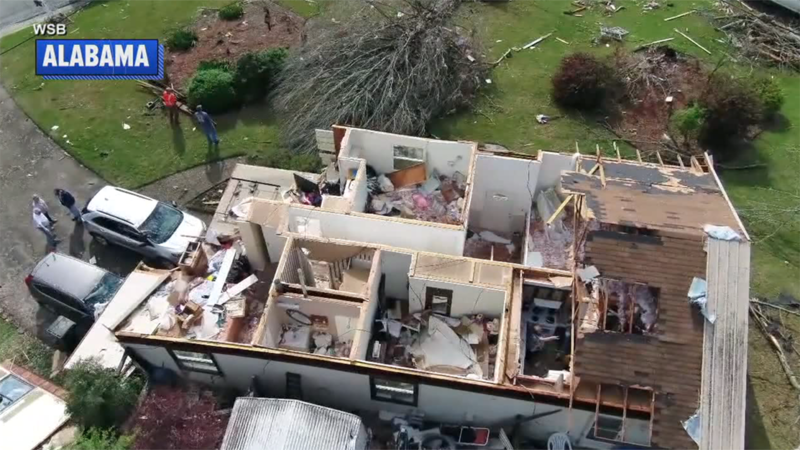 6 dead after tornadoes rip through South

BIRMINGHAM, Ala. -- Six people are dead in the South after at least 23 tornadoes tore through Alabama, Mississippi and Georgia on Thursday.

Five people lost their lives in Calhoun County, Alabama, after the state was hit with 17 reported tornadoes.

A long-track tornado may have been on the ground for roughly 100 miles Thursday, according to the National Weather Service in Birmingham.

In the Eagle Point community near Birmingham, Larry and Mary Rose DeArman were riding out the twister in their home when the "house started shaking" and "everything caved in on us," Mary Rose DeArman told ABC News.

Neighbors reached the couple quickly and dropped ladders in for them to climb out.

They went to the hospital before returning to take a look at their demolished home of 21 years.

The storm system that brought the tornado outbreak to the South is now moving across the Northeast, where scattered storms could bring powerful wind gusts.

A severe thunderstorm watch is in effect from Glen Falls, New York, to Burlington, Vermont, through 4 p.m. ET.

Wind alerts are in effect from Washington, D.C., to Philadelphia to New York to Boston through the afternoon and evening. Wind gusts could reach 50 mph.This weekend, a new storm brings yet another severe weather threat for Arkansas, Mississippi, Alabama and Tennessee.

An "enhanced risk" has already been issued for Saturday from Memphis to Nashville, where residents could see more tornadoes, damaging winds and hail.