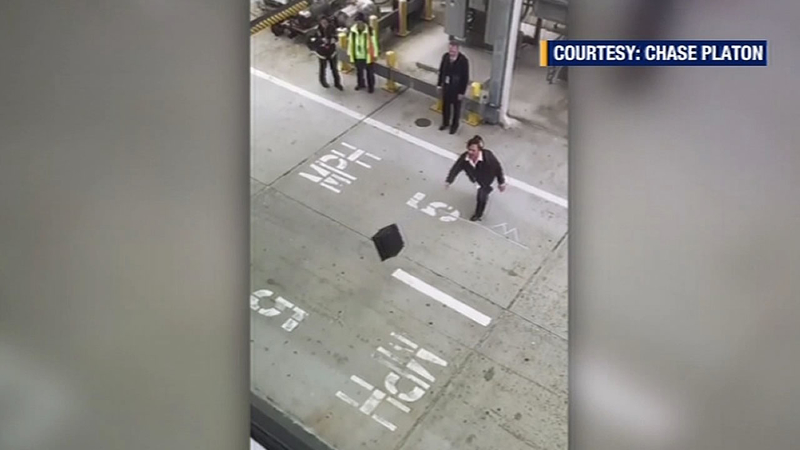 SAN JOSE, Calif. (KGO) -- A passenger boarding a flight at Mineta San Jose International Airport shot video, during the height of the Thanksgiving travel rush, of what he thought looked like luggage being tossed around with complete disregard. However, from another perspective, it shows airline employees engaged in questionable game.

The cellphone video shows Alaska Airlines employees tossing a suitcase on a service road at the airport, but the airline says the video isn't what it seems.

Chase Platon shot the video while waiting in Terminal B. He spoke to ABC7 News via FaceTime from Carmel, Indiana.

He said, "Each employee had a turn to see how far they could throw what looked like a passenger's bag."

Alaska Airlines viewed the video and responded to ABC7 News saying: "Regrettably, our employees were tossing a company rollaboard bag that was filled with magazines as part of an employee game. No passenger bag was used for this activity. This game should not have been played at the airport."

Platon told ABC7 News, "I'm all for having fun and good times. I think everyone has a good sense of humor. But in today's day and age, we're at an airport, it's not place to be joking around anymore."

After being shown the video, other passengers commented on what they saw.

"I doubt it was a bag filled with magazines and paper. That doesn't make any sense. But I would lose a lot of faith in that airline," said airline passenger John Moultrie.

"If it's not a passenger bag and it's the employee's bag who's throwing it, then I guess it's fine," said Arnav Naoawade, an airline passenger.

Alaska Airlines says there is no further information regarding the status of these employees.