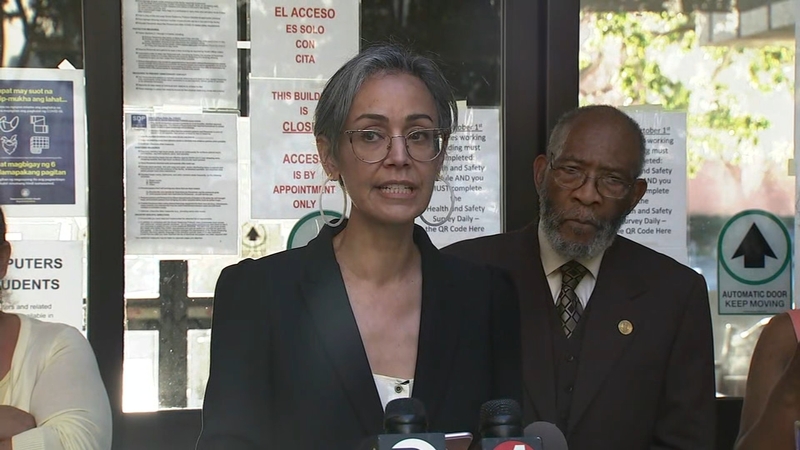 SF school board member seeks $87M in lawsuit against district

SAN FRANCISCO (KGO) -- Alison Collins, the embattled vice president of the San Francisco School Board, has filed a lawsuit against the district and her colleagues, saying they violated her First Amendment rights with their response to her posts on Twitter.

The lawsuit says the district and her colleagues infringed on her right to free speech in their response to her tweets posted back when she was a private, non-governmental employee.

The tweets, aimed at Asian Americans, were brought to light in recent weeks and called racist by some.

"So much of who I am and how I am in this world has gotten lost due to this targeted smear campaign to label me as a racist to slow the stop of equity that I have engaged in over the years," said Collins at a Wednesday rally.

San Francisco Board of Education Vice President Alison Collins' apologized for her offensive tweets aimed at Asian Americans as multiple board members called for her resignation.

She has since said they were taken out of context, but did not address that Wednesday. She fired forward instead.

"I will unapologetically pursue equity and empowerment of Black, Latin, Asian, Arab, and other communities regardless of the opportunistic and meritless attacks directed towards me," said Collins.

In the lawsuit, Collins is suing the district and five board members who voted to strip her of her vice president title and committee involvement.

Her lawsuit questions that move, and goes on to say that it is a violation of her freedom of speech, as the Tweets were made before she was voted to the board. She now seeks $87 million in damages. While many spoke to support her Wednesday outside the district headquarters, at one point she was interrupted by a man yelling "resign," to which the crowd began to chant.

Collins' lawyers are requesting that the school board act in seven days.

"We demand to have a special meeting and restore Alison to her seat. They will take no further action against Alison. They can do what we say, then this lawsuit gets shredded," said her attorney Charles Bonner.

The San Francisco Unified School District did not respond to the lawsuit saying they were just made aware of it. San Francisco Mayor London Breed and 10 of 11 San Francisco Supervisors have previously called for Collins to resign.