She is flying to Dallas and plans to join Biden at his rally Monday night, according to her campaign.

Klobuchar was the second presidential candidate to exit the race in less than 24 hours, following Pete Buttigieg's departure late Sunday. Their decisions reflect an urgent push among moderates to consolidate behind Biden as a counter to progressive rival Bernie Sanders.

Klobuchar outlasted several better-known and better-funded Democrats, thanks to a better-than-expected third-place finish in in New Hampshire. But she couldn't turn that into success elsewhere, as she struggled to build out a campaign that could compete across the country and had poor showings in the next contests.

SEE ALSO: What to know ahead of Super Tuesday

The three-term senator had one of this cycle's more memorable campaign launches, standing outside in a Minnesota snowstorm last February to tout her "grit" and Midwestern sensibilities. Klobuchar argued that her record of getting things done in Washington and winning even in Republican parts of her state would help her win traditionally Democratic heartland states like Wisconsin and Michigan that flipped in 2016 to give Donald Trump the presidency.

She was hoping to own the moderate lane of a Democratic field that grew to some two dozen candidates. But that got much tougher when Biden joined the race in April, starting as a front-runner and remaining there. Klobuchar also was quickly overshadowed by Buttigieg, a fellow Midwesterner who shot from being the largely unknown mayor of South Bend, Indiana, to a top contender on a mix of intelligence, strong oratory and youthful optimism. Buttigieg dropped out on Sunday, saying he no longer had a viable path to the nomination. He has not endorsed anyone.

Klobuchar entered the race with low name recognition compared with many of her rivals, a disadvantage she was still citing a year into her campaign. Outside Minnesota, the lawyer and former prosecutor was best known for her questioning of Supreme Court nominee Brett Kavanaugh during a 2018 Senate Judiciary Committee hearing.

Klobuchar asked Kavanaugh, who was accused of sexually assaulting a fellow teenager when both were in high school, if he ever had so much to drink that he didn't remember what happened. Kavanaugh retorted, "Have you?" Klobuchar continued, unruffled, and Kavanaugh later apologized to the senator, whose father is recovering from alcoholism.

Even before she got into the race, Klobuchar was hit with news stories claiming she mistreated her Senate staff, and she had a higher-than-usual turnover rate in her office. Klobuchar said she is a "tough boss" but countered that she has several longtime employees, including the manager of her presidential campaign.

Warren out: See who's still running for Democratic nomination
What is Super Tuesday? Here's what you need to know
AMY KLOBUCHAR 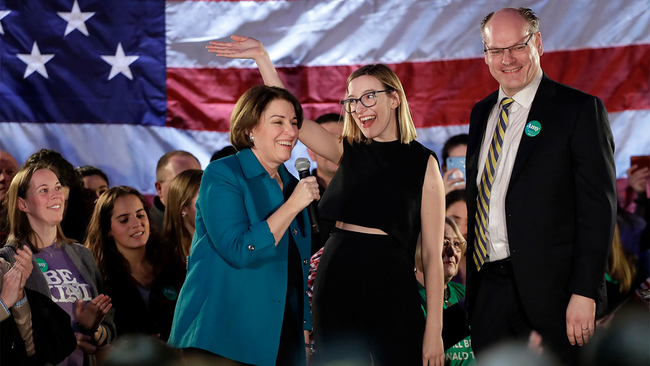