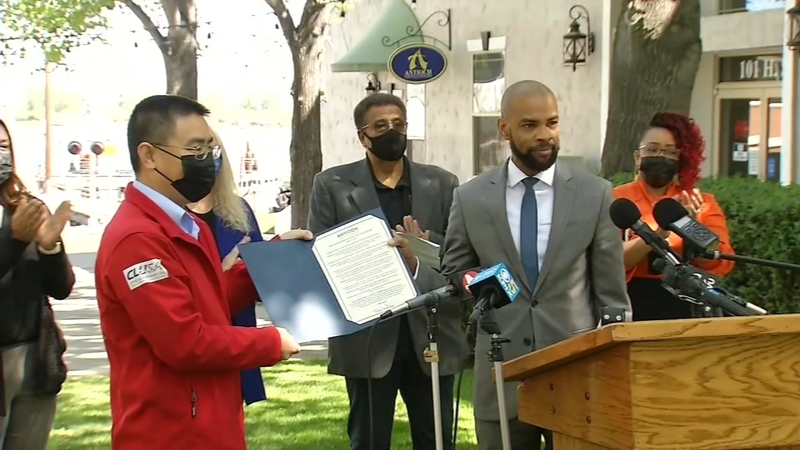 SAN FRANCISCO (KGO) -- The leaders of one East Bay city are proactively trying to make amends with their Asian community members, present and past. The effort includes a direct apology for the terror imposed on Chinese immigrants over the past century

"We know the pain of not having your government acknowledge and reconcile through forgiveness," said Antioch Mayor Lamar Thorpe.

It's a strong statement from the mayor of a small East Bay city, an effort to acknowledge not only past wrongs, but also current injustices directed toward Asian Americans.

"So therefore, we'll be advancing a resolution that officially apologizes on behalf of the city of Antioch for terrorizing Chinese immigrants in our community," said Thorpe.

#HAPPENINGNOW ⁦@AntiochCAgov⁩ Mayor Lamar Thorpe announcing proposals to make amends to Asian Americans for historic wrongs in the East Bay city. Proposals include a permanent exhibit of Chinese history dating back to the 1870s, and an official apology from the city. pic.twitter.com/e7W4MmiE4O

Mayor Thorpe also announced a list of proposals designed to celebrate Asian American history here, like the building of the railroads and levees -- but also expose darker realities -- like the underground tunnels where families took refuge, or the burning of Antioch's Chinatown District in 1876.

"Antioch has chosen to rise from the ashes of a horrible past into a more inclusive future," said Antioch city council member Tamisha Torres-Walker.

Another proposal would fund a permanent exhibit at the Antioch Museum.

"Memorializing difficult times and times of great celebration should be, and frankly must be, part of our story," said Joy Motts, chairperson of the Rivertown Preservation Society. "To not remember, to not discuss, to not teach about acts that caused great suffering and human despair, we are doomed to repeat."

#HAPPENINGNOW ⁦@AntiochCAgov⁩ City Council member Tamisha Torres-Walker “Antioch has decided to rise from the ashes of its horrible past. We say opportunity lives here in Antioch.” As Antioch proposing steps to honor Asian Americans, apologies for past discrimination. pic.twitter.com/apH8mdVoAa

One of the proposals here involves getting young people to help paint murals on the sides of buildings to celebrate the contributions of the Asian community, a way to ensure that they know and understand a difficult local history.

"Now I hope we can treat each other equally and build a community we can all enjoy and feel safe," said Andy Li with the Contra Costa Community College District.

The money for the proposals would come from Antioch's general fund, if the project is approved by the city council. Thorpe expects to introduce a resolution of apology and the other proposals next month.

For more information, visit this page.