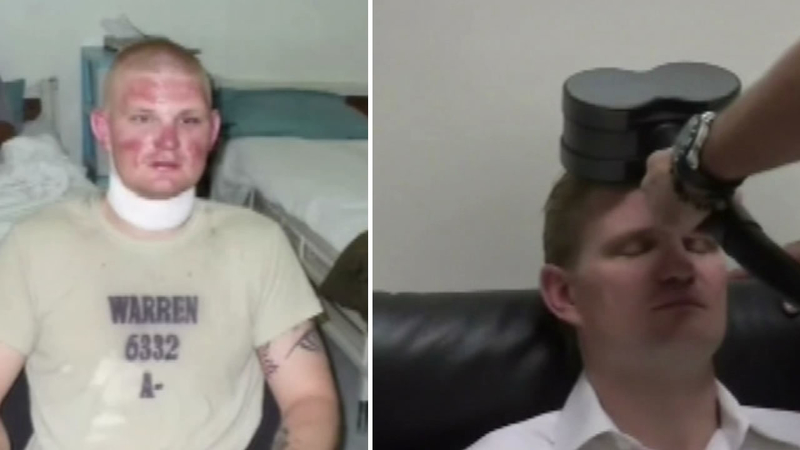 Thousands of veterans returning from Iraq and Afghanistan have suffered the effect of post-traumatic stress syndrome. A treatment developed for children with autism, could offer help.

He lives in Orange County now, a long way from the war, but one memory continues to haunt him.

"I had a traumatic brain injury, cerebral spinal fluid coming out of my ears, and watched my best friend burning alive," Warren said.

In 2006, Warren and his team were in a Humvee hit by an IED blast. Remarkably, no one died. While his physical wounds healed, Warren's psyche was far more damaged. He didn't know how badly, until he returned to civilian life.

"Everybody was a threat, so I always sizing people up, seeing if they had a bomb," he said.

He was anxious, depressed, unable to sleep -- the symptoms of post-traumatic stress disorder. He tried to self-medicate using pain killers, alcohol and marijuana. He tried therapy, but nothing worked.

Then about a year ago, someone told him about the Brain Treatment Center in Newport Beach.

It's called neuromodulation and it's used to help children with autism by stimulating areas of the brain that aren't working like they should.

Doctors at the Brain Treatment Center believe it can help veterans like warren by restoring parts of the brain affected by war.

Doctors take a scan of the person's brain and show them what is causing certain issues, then they work to fix them.

"My anxiety was gone, and I had quieted down in my head," he said. "I was actually able to be present with my friends and family."

He now works at the center as a veteran liaison encouraging others like Joseph Hummel to try it. Hummel and his autistic son began therapy a few months ago, changing their family forever.

"My wife had a 30 minute conversation with her son for the first time in 14 years and it was unbelievable," Hummel said.

The center says this treatment for veterans will be in the clinical testing stage until 2015, but it's already gaining support from some of the foremost neurologists in the country.

"I really think that this type of approach will have a very significant impact on how we treat neurological diseases," Dr. Charles Liu, director of USC Neurorestoration Center, said.

The Brain Treatment Center also recently received a $100,000 grant from the Infinite Hero Foundation, an organization that funds innovative programs to help veterans.

Warren says the goal in all of this, is to give hope to the men and women who gave so much to protect our country.