The BART rider who shot a video of the man on her cellphone shared that video with ABC7 News.

The man with the chainsaw was arrested at the Lake Merritt BART station Monday afternoon. What stunned riders is that he boarded the train not with the chainsaws concealed in a bag but was swinging them around in full view.

A frightened BART passenger filmed a man pulling out two chainsaws on a train.

Jalina Bluford was on her way home from work from Fremont on the Richmond line when she looked up to see a man armed with two chainsaws out in the open by the door. She said, "That's when he starts joking with everybody... it's Halloween. It's Halloween. Then he says Texas Chainsaw Massacre, Bart massacre. He says that joke. I could see people concerned and scared at this point so I'm just like let me record this."

She tweeted BART for help and says they replied right away, suggesting the "best thing to do is snap a picture and send it to dispatch via the BART Watch app."

Bluford says she watched him in horror for more than 15 minutes as he clicked on the red chainsaw. Then she says he unboxed a new battery-powered chainsaw and tried to start it.

She says as he exited the Lake Merritt Station, BART police arrested him. She said, "They rushed him and he was surprised like he doesn't know why he's rushed and then you see the relief. Everybody's OK. It's like... we made it. "

One BART rider reacted by saying, "We ride BART every day and don't feel like we want to come here and be assaulted by someone with a chainsaw."

Some riders commented that with all the cameras and security supposedly in place, they found it unfathomable that a man holding two chainsaws made it through the fare gates in the first place.

For more stories and videos related to BART, visit this page.

Police received multiple calls and officers quickly positioned themselves to board the train at Lake Merritt when the man actually got off. There was no waiting to respond, they acted within minutes.

CHAINSAWS on BART. The woman who took the video of the man brandishing them tells her story #abc7news pic.twitter.com/mcXsRBqiot 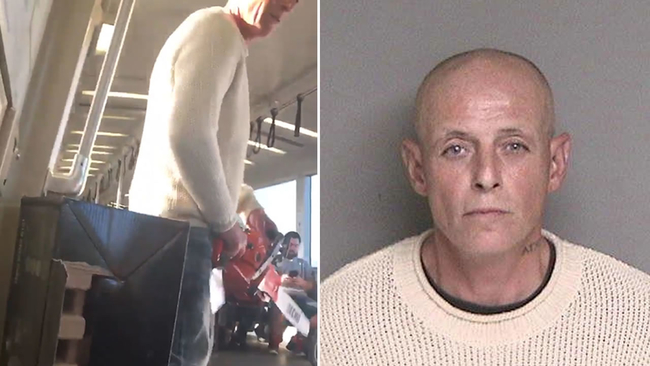