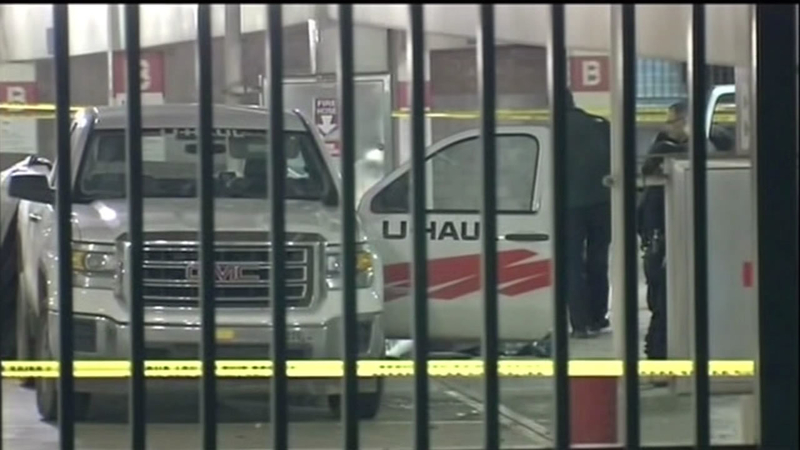 HAYWARD, Calif. (KGO) -- The dead man found in a U-Haul truck linked to a suspect in an officer-involved shooting at the Hayward BART station on Christmas day has been identified.

The Alameda County Coroner's Office has identified the person found in the truck as 40-year-old Jason Anderson from Bay Point. But the coroner's office would not release details on how he died because that's part of BART's ongoing investigation.

On Christmas Day, officials say a couple of BART police officers noticed 28-year-old Charles Goetting acting suspiciously near the U-Haul truck. When they starting asking him questions, they say he pulled a gun and shot one of the officers in the arm.

The second officer returned fire and hit Goetting, who is on probation and had a gun in his waistband and other suspicious items on him.

"There were several other articles of criminal activity inside Mr. Goetting's backpack," said BART Police Chief Jeffrey Jennings. "He had a BB gun, he had a ski mask, burglary tools."

Goetting was arrested and taken to Eden Valley Medical Center where he remains in police custody.

BART police later found Anderson's dead body in the U-Haul along with tarps, a shovel, a pickaxe, and gas canisters.

Police also say Goetting fired at them with a ripped off handgun.
"The gun was stolen and the vehicle that the suspect was in had switched plates on it," said Jennings. "So we believe it was stolen, but we haven't figured that out yet."

BART police have said that Goetting was on probation for burglary and other charges. But they have not released any other details on the suspect and any possible connections to the person found dead in the back of that U-Haul truck.
Related topics:
haywardofficer injuredalameda countypolice shootingofficer involved shootinghospitalofficer involved shootingshootingpoliceinvestigationbartbody found
Copyright © 2022 KGO-TV. All Rights Reserved.
RELATED
Body found in U-Haul connected to shooting of BART cop
TOP STORIES
Doctors weigh in on what future of living with COVID looks like
Sickout planned in Oakland as students go back in Hayward
Bay Area families fear for relatives in Tonga after tsunami
Customers wait 7+ days to get COVID test results from local company
Bay Area native killed after man pushes her in front of NY train
Local Native Americans oppose replica mission bell installation
AT&T to delay 5G deployment near certain airports
Show More
Fight for equal access to vote continues on MLK Day
Omicron surge hasn't peaked nationwide: US surgeon general
Candle test helps show when face masks aren't doing their job
COVID-19 updates: Stanford to resume some in-person learning today
A look back at Dr. King's visits, impact in the Bay Area
More TOP STORIES News