'Last unicorn' of Bay Area real estate listed at $25M: How could it possibly be worth it? 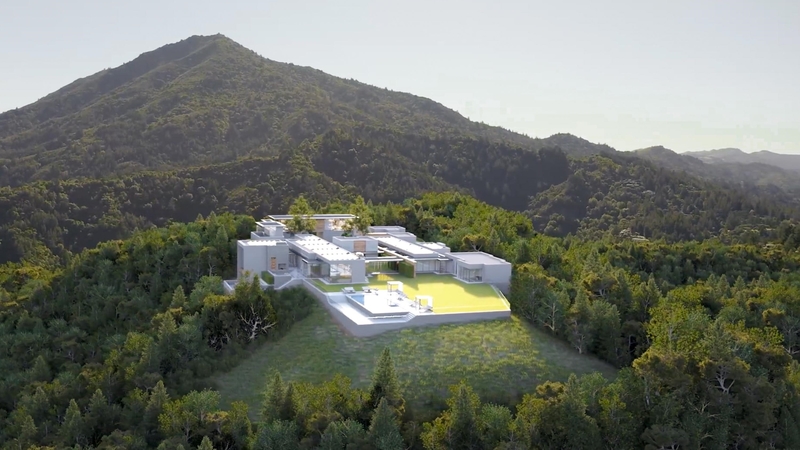 MARIN CO., Calif. (KGO) -- A property going to auction in Marin County is so rare and precious, it can hardly be described by the usual real estate lingo of "hidden gem" or "diamond in the rough." A more Silicon Valley, startup-y word will have to do: "the last unicorn."

That's how 128 Ridgecrest Road was described to me by Steven Mavromihalis, the Compass real estate broker showing me around the 140-acre property. (See it for yourself in the video above.) The current owner is hoping to fetch $25 million or more at a no-reserve auction in May.

Its previous owner is Herb Boyer, a co-founder of Genentech. He secured approval from the county to build a 27,500-square-foot estate that includes a main house, guest house, pool house and living quarters for staff, stables, tennis courts and more. All those plans are vested so the new owner can start building immediately.

There's no house on the property yet, but if you're hung up on that minor detail, you're not the right kind of buyer.

"Here in the Bay Area we are blessed with having some of the most creative minds anywhere in the world. That type of creative mind is the person that's going to buy this," says Mavromihalis. "Somebody that says I could buy somebody else's house or I could build a house that's like no other, in the midst of all this open space with these views, this close to San Francisco -- it's a property like no other."

RELATED: Private island, listed at $19.5 million, set to go up for auction

As we drove down the gravel road from one section of the property to another, Mavromihalis asked me, "Can you imagine all of this being your home?"

"Me?" I responded. "Personally, I absolutely cannot imagine that."

See? I'm not the type of buyer these folks have in mind.

Still, the broker does his best to paint a picture for me. We start at the peak of the property, in the largest clearing where the pre-approved plans would plop down the main house. You can see the San Francisco skyline, the Bay Bridge and downtown Oakland from the patch of the grass that may soon be a billionaire's infinity pool. If you turn around, Mt. Tamalpais is watching over you. Just about everywhere you look is protected open space.

Down a steep walking path there's a spot for a 4,000-square-foot guest house, which believe it or not has even better views of the city skyline. Mavromihalis shows me where a future owner could put a vineyard, a manmade pond and another infinity pool, this one facing Mt. Tam. (When I ask how many pools the plans include, he simply responds, "Many.")

Of course, the future owner can scrap all those plans and chart their own path. Anything with a smaller footprint than what's already been proposed shouldn't have too much trouble getting the OK from the county, Mavromihalis says. There are five wells on the property and plenty of real estate for solar panels, meaning a potential buyer could live totally off the grid if they wanted.

The thought of living so surrounded by nature immediately makes me think of wildfires. But the ultra-rich have a solution for that, too. Private firefighters fit comfortably into the budget of anyone building their dream home on this mountain.

It's possible there won't even be a house to protect from hypothetical fires. Mavromihalis acknowledges the land may be purchased by an investor, just looking to "hedge" against the future.

"Prices in Marin have escalated according to some statisticians well into the double digits -- more than any of the Bay Area counties," he said. "With a lot of attention, not just in Northern California but on real estate in general, as an asset that appreciates but also as a wonderful hedge of what might come in the future."

Only the future owner knows whether the estate will turn into an ultra-luxe mansion or remain a quiet investment. He or she will have a shot to snag it at the no-reserve auction starting May 12.

Editor's note: The auction was originally set to start April 22, but has been moved to May 12-19. This story has been updated to reflect the change.