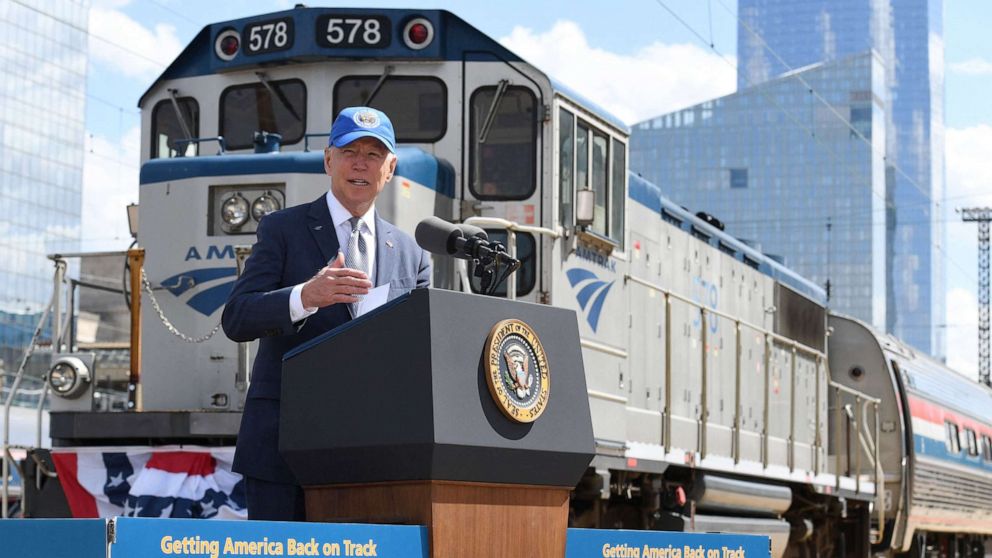 On the 50th anniversary of Amtrak on Friday, President Joe Biden reflected on how the rail service had given him a second "family" and used the celebratory event to pitch his $2 trillion infrastructure plan, which would allocate $80 billion for the rail service.

Biden, an avid rail user who earned the name "Amtrak Joe" for his devoted use over decades as a senator, became sentimental about what rail service means to him and noted its value as a form of American transportation.

He estimated, with the help of an Amtrak conductor, that he'd ridden 1.5 million miles by train.

"It provided me, and I'm not joking, an entire other family," he said, adding that, "We've shared milestones of my life. And I have been allowed to share milestones in theirs. I've been to an awful lot of weddings and christenings, and unfortunately some burials as well. We're family."

Biden used Amtrak's event to make his case for the importance of investing in rail as part of the "Back on Track" tour the administration is currently on.

"I've come to see that Amtrak doesn't just carry us from one place to another. It opens up enormous possibilities. And especially now, it makes it possible to build an economy and a future, and one that we need," Biden said.

As he did during his joint address to Congress, Biden pitched this moment as a "once in a generation opportunity" for an investment in rail.

"We have a once in a generation opportunity to position Amtrak and rail and inner-city rail as well, in general, to play a central role in our transformation and transportation economic future, to make investments that can help America get back on track, no pun intended," Biden said

The president also talked about the jobs the expansion will create.

"It's going to provide jobs," Biden said. "It will also accommodate jobs. And what this means is that towns and cities that have been in danger of being left out and left behind will be back in the game. It means families don't have to sacrifice the cost of living or quality of access to opportunity that sometimes only occurs if they live in a big city."

Biden touted the environmental benfits of rail, saying its expansion could be a "gamechanger" and that with high-speed trains, people could travel from Washington, D.C. to New York in an hour and 32 minutes.

He also highlighted the importance of investing in infrastructure to keep the U.S. competitive, noting China's advancement on high-speed rail in particular and lamenting that America is "behind the curve."

"We need to remember, we're in competition with the rest of the world. People come here and set up businesses, people stay here, people grow because of the ability to access, access transportation, access all the infrastructure," Biden said. "It's what allows us to compete."
Report a correction or typo
Related topics:
abc newsnational
Copyright © 2021 ABC News Internet Ventures.
More Videos
From CNN Newsource affiliates
TOP STORIES