SAN FRANCISCO (KGO) -- A section of San Francisco's busy Market Street has been shut down after a big-rig crashed into a funeral home. Hazmat crews have been busy at the scene.

A man who took cellphone video says he heard the accident first and was shocked when he saw it. He said it did not sound like a vehicle crash. 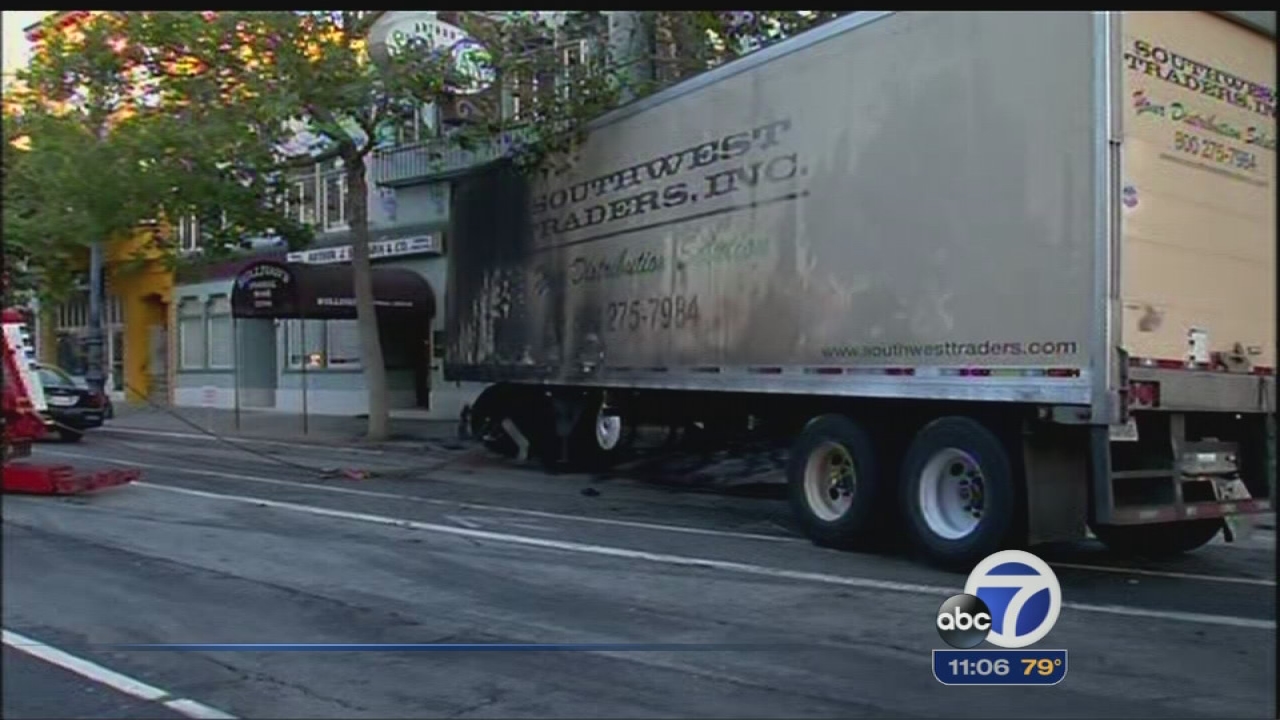 "The sound was so loud, it sounded like steel girders falling 20 stories off of a building on to the cement," said witness Tom Hahn.

A tractor trailer headed down San Francisco's Market Street in the Castro District at 12:30 this morning crashed into Sullivan's Funeral Home and burst into flames. There were two men inside the truck.

"They were very fortunate, I expected to find human remains inside this vehicle, luckily they escaped before they were seriously injured," said San Francisco Fire Dept. Batt. Chief Kevin Taylor.

"Then all of the sudden the gas tank blew and the flames shot up into the air," said San Francisco resident Sylvia Geller.

Geller lives above the funeral home. She saw so much orange, she thought for sure the business and her home would be destroyed.

"The color of the room and the sounds and everything I thought half of this building was already gone. I thought it's time to get out," said Geller.

Firefighters say fuel that was on fire was floating down Market Street, so they decided to evacuate Beck's Motor Lodge next door. It took about an hour and half to get the fire out, the trucks' cab was unrecognizable, but the 90-year-old funeral home was saved -- scorched on the outside, but fine on the inside.

"It's just property damage, it's not loss of life or anything we are very grateful for that," said Jerry Sullivan, funeral home owner.

By late morning, westbound Market Street was still closed and attracting a lot of curious onlookers. Many people wondered why the truck was still there, especially the motel guests who saw the accident.

"I expected it to be gone and back to normal this morning when we got up, but nope," said Linda Cofer, witness.

The driver told police that the hood of his truck popped open and he hit a median before hitting the funeral home. The driver and a passenger were treated for minor injuries.