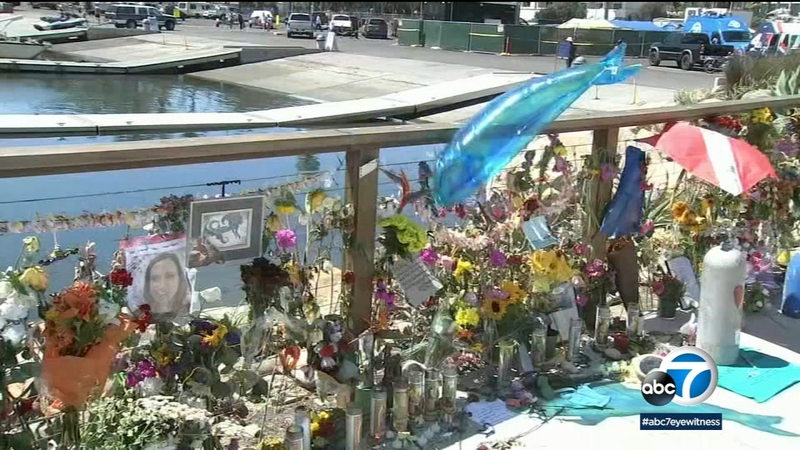 Santa Barbara County Sheriff Bill Brown told reporters that all the victims sleeping in tight quarters below deck around 3:15 a.m. Monday had signs of smoke inhalation and a preliminary examination shows they died before being burned.

The fire is believed to have killed 34 people, but the remains of one of the crew members has yet to be recovered. The other five crew members who were above deck survived the fire by jumping overboard and say they tried to save the victims.

Brown says there are no plans to conduct traditional autopsies, with a pathologist convinced smoke inhalation is the primary cause of death, but examiners will make a final determination.

The sheriff says there are multiple investigations into different aspects of the fire but it hasn't become a criminal probe.

AIR7 HD was over the scene near Santa Cruz Island where recovery efforts continued Friday.

Search and rescue crews continued to attempt to recover the 75-foot scuba diving boat that went up in flames and sank, killing dozens of sleeping passengers early Monday morning.

U.S. Coast Guard officials said the vessel was inverted underwater and must be turned over before being raised.

"Salvage operations can take some time. It is a very exacting, tolling process on the folks that are on scene, the divers that have to assist, and the continued assessment and rigging of the vessel," Coast Guard Capt. Monica Rochester said Friday. "So it's not a hurry up and lift and be placed on the barge. It's an incremental effort to make sure that we try our deliberative best to keep the vessel in tact for further investigation requirements."

Brown released the names of nine of the victims. He said the victims' identifications require DNA analysis because of the fire's intensity. Brown added that the families of all 34 victims have been contacted to collect DNA samples.

The victims whose identities were released include:

In the meantime, the agency expects to issue a preliminary report in just 10 days that will review the basic facts of the case, without drawing conclusions about the cause.

The wreckage of the boat is submerged in 60 to 65 feet of water and inverted. Investigators are taking photos and videos of the wreckage before an attempt is made to bring it back to the surface.
Investigators believe vital evidence may have gone down with the ship or drifted out to sea.

A candlelight vigil was held in Long Beach Thursday evening for those killed.