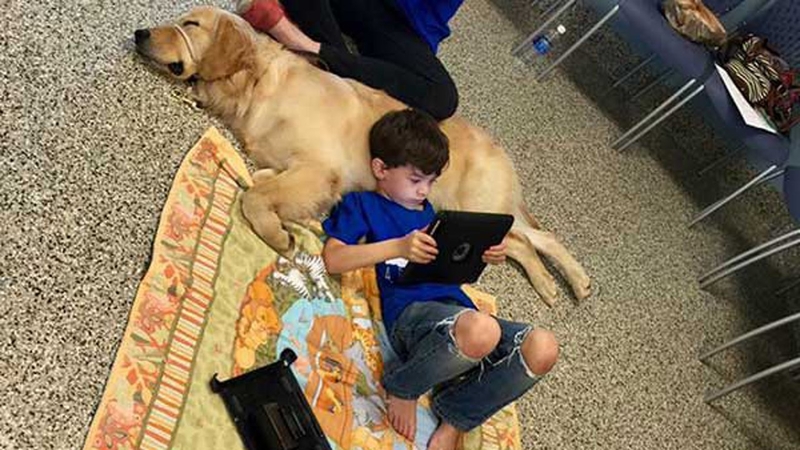 XENIA, Ohio -- When a young boy with autism met his service dog for the first time, he wasn't just meeting a new friend - he was meeting his first friend.

Five-year-old Kai and his mom flew to Ohio from Japan to meet his new autism assistance dog on Monday. Since Kai struggles with social situations, his mother wasn't sure how the meeting would go.

But as Tornado was led into the room, Kai jumped up and ran to him, then immediately began petting and snuggling him, yelling "Tornado! Tornado!"

After watching her son fail in countless attempts to make friends at home, Kai's mom Shanna Ni said she felt like "the air had been sucked out of her lungs" as she watched her son connect instantly with Tornado.

Ni shared her emotional story on the Facebook page for 4 Paws for Ability, the agency that trained Tornado and placed him with Kai. She said she began sobbing when Kai laid down on Tornado just moments after meeting him.

"This picture captures the face of a mother who saw her child, who she can't hug, wash, dress, snuggle and touch freely lay on his new Service dog of his own free will, with a purposeful unspoken attachment," Ni wrote.

It was the moment that Kai and his family had been waiting for. 4 Paws for Ability CEO Karen Shirk said it took a year to train Tornado to meet Kai's specific needs.

"For Kai, the dog is trained to scent track him if he elopes and the family is unable to find him so they can get to him quickly before anything bad can happen," Shirk said.

For Kai and his family, Tornado was worth the wait.

"Somehow because of this - because of Tornado - I know everything will be okay," Ni said.