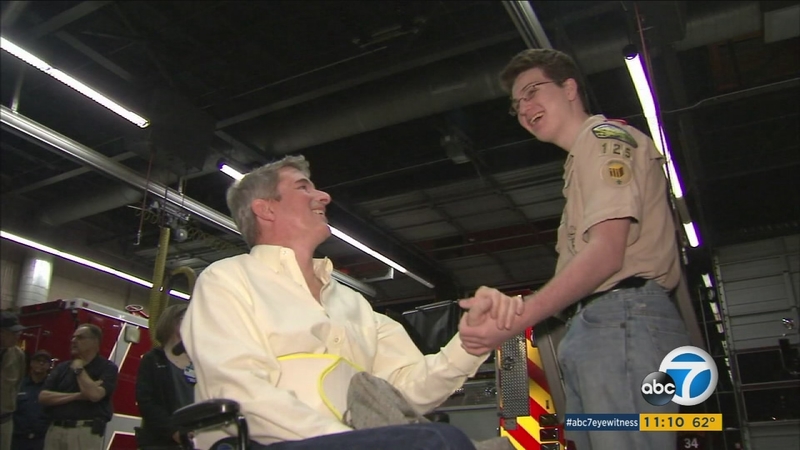 Boy Scout jumps into action when dad has stroke behind wheel

PASADENA, Calif. -- John Hall was behind the wheel when he suffered a stroke. That's when his 16-year-old son Evan jumped into action, using skills he learned in the Boy Scouts.

Due to the effects of the stroke, Hall can only say a few words, but words aren't needed to express his emotions when he looks at his son, Evan.

Hall, an Army veteran, was driving Evan and his three other children to school a few weeks ago when he suffered a massive stroke.

"I knew something was wrong when he first accidentally ran into the car in front of us, which really struck me as odd," Evan said.

Evan immediately dialed 911. The longtime Boy Scout has taken training with his troop, learning about the signs of stroke and heart attacks.

Wednesday night, firefighters at Station 31 in Pasadena and the American Stroke Association honored Evan for his brave, life-saving actions. He was joined by members of Boy Scout Troop 125.

"Evan is on the autism spectrum. For him to really take charge and say, 'It's not going to be fine and Dad's having a stroke. We need to call 911,' is really extraordinary for him to be able to do that," said Evan's mother, Jenn Hall.

One thing that impressed everyone is that Evan not only knew his father was suffering symptoms of a stroke, he knew there was no time to waste.

Still, Evan remains humble about what he did.

"You're only a hero if you go out of your way to do good. I was doing my job both as a son and some guy who actually knows how to help," Evan said.

Evan's dad has a long recovery ahead but he's making progress.

"Evan, I don't think, will ever feel like he did enough, but in mine and John's eyes, he's just amazing," Jenn Hall said.