California's major theme parks like Disneyland and Universal Studios will have to wait longer to reopen under guidance released by the state on Tuesday.
KABC
By Tony Cabrera and ABC7.com staff 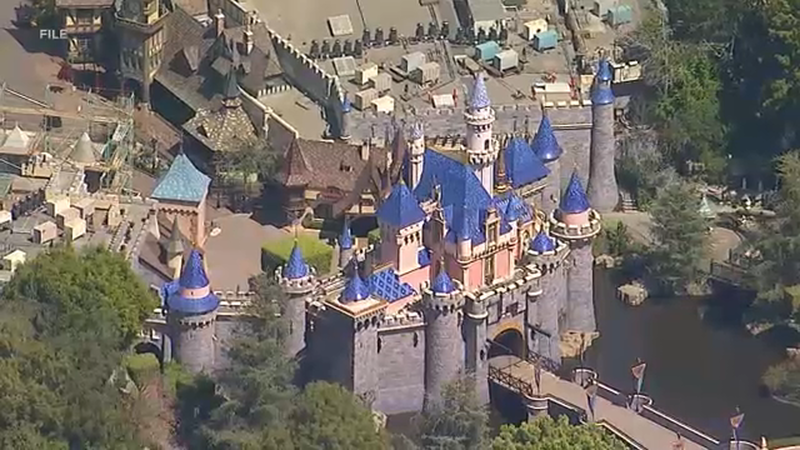 ANAHEIM, Calif. -- California's major theme parks like Disneyland and Universal Studios will have to wait longer to reopen under guidance released by the state on Tuesday.

Larger theme parks will only be permitted to reopen in counties that have reached the least-restrictive, or yellow, fourth tier of the state's reopening framework, and even then, capacity will be limited to 25%. Orange County, home to the Disneyland, is currently in the second, or red, tier of that matrix. Los Angeles County, home to Universal Studios, is in the most-restrictive, or purple tier of the state's framework.

"Personally, I think that we can look forward to a yellow tier by next summer, hopefully. Hopefully," said Dr. Clayton Chau, director of the Orange County Health Care Agency.

Smaller, more localized theme parks will be able to open outdoor attractions in counties in the third, or orange, tier of the COVID-19 roadmap. Smaller theme parks are considered those with a capacity of 15,000 or fewer.

Health and Human Services Secretary Dr. Mark Ghaly outlined the update on theme parks during a virtual press conference, stating that California is currently in tier 1.

Does the new color coded, 4-tier system for monitoring COVID-19 in California leave you scratching your head? ABC7 breaks down what each tier means.

Ghaly added that the more restrictive rules were established for larger theme parks -- like Disneyland, Universal Studios and Knott's Berry Farm -- because of the tourism that the attractions draw, bringing people from outside communities to the area.

The state's guidelines were immediately met with condemnation from theme park industry leaders.

"We have proven that we can responsibly reopen, with science-based health and safety protocols strictly enforced at our theme park properties around the world. Nevertheless, the State of California continues to ignore this fact, instead mandating arbitrary guidelines that it knows are unworkable and that hold us to a standard vastly different from other reopened businesses and state-operated facilities. Together with our labor unions we want to get people back to work, but these State guidelines will keep us shuttered for the foreseeable future, forcing thousands more people out of work, leading to the inevitable closure of small family-owned businesses, and irreparably devastating the Anaheim/Southern California community."

About 50 owners, managers and employees of hotels, restaurants and shuttle companies gathered across the street from Disneyland to show their frustration with the state's new guidelines for reopening theme parks.

Ghaly conceded that under the guidance, there is no way to know when major theme parks will be able to reopen, since the decision will be dependent on countywide COVID-19 cases.

"I think there's lot of work we can do together ... to do what we can to reduce transmission in our counties, and there is a path forward there,'' he said. "We do not know when, but we do know how.''

The California Attractions and Parks Association is planning a virtual news conference Wednesday morning to discuss the state's guidelines.

The organization released the following statement on Tuesday:

"To say today's announcement on theme parks is disappointing would be a grave understatement. The Governor has not used science or data to inform his decision. Theme parks have opened and operated safely around the world for months. Data and science prove that theme parks can operate responsibly anywhere - there is no rational reason to believe they can't do so in California. No one cares more about park employee and guest safety than the parks themselves."

"Good Morning America's" exclusive behind-the-scenes look inside Disney World as it prepares to reopen amid the coronavirus pandemic.

The state will also allow in-person attendance at outdoor events for professional sports in counties that are in the orange tier, with capacity limited to 20%. Counties in the least-restrictive yellow tier can allow capacity at 25%.

Ticket sales will be restricted to fans within a 120 mile radius of the outdoor stadium. Also, tickets must be purchased in advance and assigned seating will be enforced. Face coverings will be required, and tailgating will be prohibited.

"I hope one recognizes our stubbornness on a health-first, data-driven decision making process is done with our eyes wide open on what's happening now around the world," Gov. Gavin Newsom said Monday. "... We have to maintain that vigilance so we can avoid any further increase in transmission."

Disneyland, Knott's Berry Farm and other theme parks in California have been closed since the early days of the coronavirus pandemic in March.

Anaheim's tourist-based economy has been particularly hard hit due to the closures. A number of small businesses and independent hotels have remained closed waiting for the theme parks to reopen. The Walt Disney Co.'s Parks, Experiences and Products division, which includes Disneyland, recently announced 28,000 layoffs.

About 50 owners, managers and employees of hotels, restaurants and shuttle companies gathered across the street from Disneyland Tuesday to show their frustration with the new guidelines for reopening the park.

"This is not just Disney, a huge conglomerate that's losing billions of dollars, these are mom pop businesses," said restaurant owner Mariam Elhaj. "These are generational families that have been here in Anaheim for a very long time."

"I call on Gov. Newsom to come to Anaheim to see for himself the devastation this is causing to so many working families," Anaheim's Mayor Harry Sidhu said.


Having trouble viewing? For a better experience, click here to view the full map in a new window