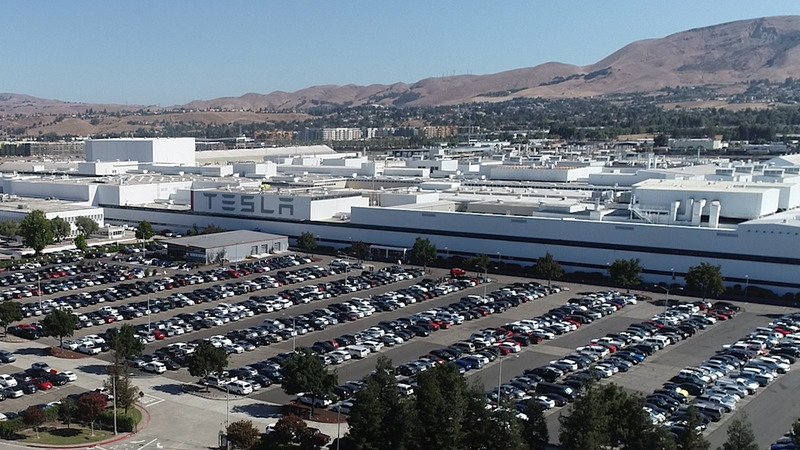 FREMONT, Calif. (KGO) -- In order to build a better Bay Area, the Bay Area has to be a good place to do business.

As ABC7 News focuses on the City of Fremont this week, we're looking into how its legacy manufacturing environment has shaped the expanding city. And how the tech community is managing.

When people think of Silicon Valley, perhaps they think of some of the major players: Google in Mountain View, Facebook in Menlo Park, Apple in Cupertino, or Adobe in San Jose.

But what about the City of Fremont? Sure, most are familiar with Tesla. But take a drive around, and you're sure to notice an extensive and rapidly expanding city with tech and innovation around every turn.

"We, as an organization, want to be as nimble and as entrepreneurial as the next start-up in Silicon Valley," Fremont's Economic Development Director Christina Briggs explained. "So, that means rethinking how we attack our own questions and how we operate as an organization."

She said Fremont is focused on finding ways to be efficient. Adding, the City is using technology, building public-private partnerships, and leveraging the private sector at home.

"Where better to look than in your own backyard for some of the solutions to your own sustainability questions or challenges," Briggs said.

She continued, "All of the cleantech and innovation that's going on in our Bay Area, there's a very large concentration of that happening here."

So, ABC7 news is taking viewers inside three very different companies. These are separate industries, and they're all thriving within Fremont's borders.

There are two questions to be answered: How is the city working with the tech community to make it a good place to do business? And how does doing so benefit both sides?

The company is ranked among the fastest-growing private companies in the Bay Area.

"The advantage of being in Fremont is we can service all three airports," Magnan said. "Plus, the ports of San Francisco and Oakland. A lot of our products are coming in from overseas."

Location and opportunity are two big selling points for Magnan.

"The community is growing up around us. So, when I moved in here, we didn't have all this retail we have just a few blocks away," he said. "That was just empty fields."

He hopes the current rapid growth within the City of Fremont will bring a bigger and more diverse workforce.

"You see all the new construction, all the new people coming in. It's a great place to be doing business right now," Magnan explained.

He said the company's biggest challenge is staffing, especially considering RK Logistics Group has more than one Fremont site.

"We started here with 200,000- and we're close to half-a-million square feet right now. Most of it in Fremont," Magnan told ABC7 News.

He said the company has customers located in Fremont, and around the world.

"We do service Apple, we do service the big companies," he explained. "Google and those types of people as well."

When asked about the City of Fremont's involvement in the company's success, Magnan said the city has also helped them work through all of the challenges of growth

Steri-Tek is the second company visited by ABC7 News.

Essentially, a wall of electrons works to penetrate any DNA or bio-burden found on equipment passing through it.

The magic happens within a bunker, build with 10-million pounds of concrete.

Nichols explained the City of Fremont came to his rescue when there were problems during its construction.

"They brought together all of the major department heads within the City of Fremont- planning, fire- and brought them in the same room as us," Nichols described. "We worked out a plan on how we can solve the problems, and fast tracked it so we were able to get in business."

The assistance is very much a two-way street across the City of Fremont.

Briggs, with the City of Fremont, said, "Before Steri-Tek came to Fremont, companies were often having to ship their products off to somewhere further away. Then, having it come back or to the customer."

She said, "Now, I have companies in Fremont that can go down the road to Steri-Tek for the sterilizing needs they have."

This next company approached the City of Fremont in 2015 about acting as a partner in an opportunity to establish resiliency, and build critical infrastructure.

Some background, Gridscape Solutions develops clean technology- namely microgrids, battery banks and more. It's technology that is now used to help critical facilities establish resiliency in the case of an emergency.

Gridscape Solutions President and CEO Vipul Gore first approached the City of Fremont about building solar panels and power banks at Fremont Fire Stations to keep the lights on during power outages.

In cooperation with the California Energy Commission, the systems were then built at three Fremont Fire Stations.

"The first fire station was fire station #11," Gore explained while visiting Station 6. "That took about 18-20 months. This one, we completed in probably 10-12 months.

The infrastructure was dedicated in April.

If you ask Gore, there was no better timing, as PG&E Public Safety Power Shutoffs are becoming more routine, and are also leaving first responders in the dark.

The functioning Gridscape system automatically kicks in to keep the power on. Now, other cities across the Bay Area are doing what they can to keep up.

"We are talking to the City of San Jose, Santa Clara, San Francisco, Berkeley, San Leandro, Portola Valley, Milpitas," Gore said. "So all these cities... Pleasanton, Livermore. I'm probably forgetting many. Today, I had a call from the City of Vallejo."

There is no slowing down in the City of Fremont.

But is booming tech business leaving others behind?

ABC7 News asked Briggs, "Where do the smaller businesses, maybe mom and pop shops, and retail fit into the focus from the City of Fremont?"

"They're more important than ever," Briggs replied. "One of my favorite sayings is that business needs talent, talent needs a place, and place needs business."

She understands employees are looking for amenities, and so are the residents. So, the goal is to really focus on trying to create a sense of place in some of Fremont's key neighborhood business districts.

Business leaders at RK Logistics Group, Steri-Tek and Gridscape Solutions both spoke about the benefits of being in Fremont.

We asked Briggs, "What do you think having them here offers the city of Fremont?"

"Of course, all of these businesses and this eco-system are our local economy, they are what fuel the city literally," Briggs answered. "But they are our brand too. They are our identity and so, when we think about what Fremont is in the Silicon Valley context, this is the face of advance innovation in things like clean technology and biomedical innovation."