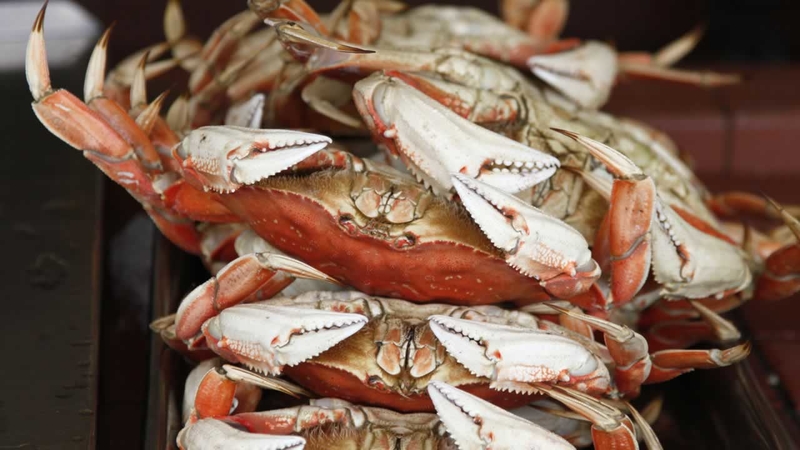 SANTA CRUZ, Calif. (KGO) -- The California Department of Public Health has issued a major warning for people to not eat crab caught along the California coast under any circumstances.

This could mean a possible delay to the start of the crab season, which is days away from starting.

At the Santa Cruz Harbor the crab pots are ready to go, but they could sit idle indefinitely now that the crab season is up in the air.

It's just about the time of year when people get excited about local crab. Employees at Johnny's Harborside Restaurant in Santa Cruz say customer interest can get pretty intense.

"Begging for it, angry when they don't get it. Yes, and pay whatever for it," said Dustin Miller from Johnny's Harborside Restaurant.

However, no amount of money can ignore the toxins found in Dungeness and rock crab off the California coast.

In fact, the levels of algae-produced domoic acid are so dangerously high right now, that the State Department of Public Health is warning people to avoid eating California crab entirely.

"You can't cook it out by cooking it extra well. It isn't going to dissipate the domoic acid, so our recommendation is just to err on the side of caution," said Patrick Kennelly of the Calif. Department of Public Health. "The side effects or the long-term potential damage to your body over exposure high levels of domoic acid are very severe."

Symptoms include vomiting, diarrhea and cramps, and in severe cases, high exposure can lead to coma and even death.

None of this is good news for crab fishermen. The recreational season is supposed to start Saturday, the commercial season two weeks after that, but now all of that's in flux.

"I fish Albacore in the summertime, but crabs is seven months of my income," said fisherman Joe Tomasello.