ONLY ON ABC7NEWS.COM: San Francisco residents pleading with thieves to spare their vehicles 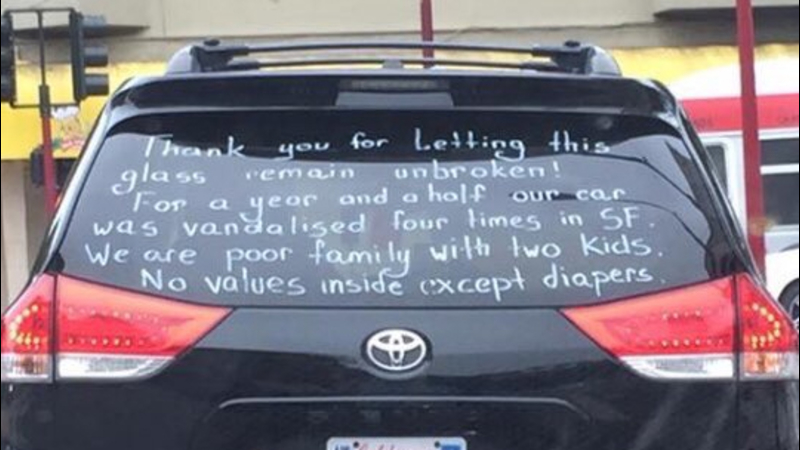 SF residents pleading with thieves to spare their vehicles

SAN FRANCISCO (KGO) -- San Francisco residents fed up with having their cars broken into multiple times have taken matters into their own hands. They're hoping to connect with would be thieves on an emotional level.

Fed up with having his vehicle broken into four times over a year and a half, Felix Kubin decided to express his frustration, writing on the rear windshield, "Thank you for letting this glass remain unbroken. We are a poor family with two kids. No values inside except diapers."

On the driver's side window he wrote, "No valuables inside except baby's milk."

On the rear passenger window he wrote, "Nothing to take valuable in this car. Thank you."

Kubin and his wife learned what would work the hard way. First break in, they lost $1,500 worth of sporting goods.

Creativity contest! Okay it’s not really a contest BUT I do want to hear from you! Have you taken a pic of a note in or on a car like this? Please show me your best plea to SF car break in thieves! @SFCarBreakins @abc7newsbayarea pic.twitter.com/H8X1nppTyc

"I think maybe it's my fault I left the car in such a place," said Kubin.

Second break-in, they lost just a bag, but in a third break in at Golden Gate Park, much more.

"That time we was really upset because it was all my official papers," said Kubin.

"My passport, social security, working permit, everything, it was my wallet, it was two phones," he continued.

The fourth break-in was on Otis Street.

"I see the thieves just open and see milk and diapers and left it," said Kubin.

That's when he decided to use a marker to plead his case as a dad.

Kubin says he thinks thieves are using a tool that breaks glass in an emergency.

Other people have shared photos with ABC7 News of similar pleas to thieves.

One person wrote their entire glovebox was stolen and assures potential criminals they only have eight CDs in the car. The note even lists the CDs.

Another person wrote, "Please do not break into the car. It has been broken into SIX TIMES ... we cannot afford paying for more car windows."

Another person simply wrote, "All Valuables Have Been Removed."

"In one sense, it's creative and it does follow the strategy that people are taking responsibility. But on the other hand, it's really sad that people feel they have to do that," San Francisco Police Chief William Scott said, responding to the pictures we showed him of vehicles with notes.

SF is this your car? I would LOVE to talk to you! @SFCarBreakins melanie.woodrow@abc.com Someone please help me find this car (owner). Thanks!! pic.twitter.com/dR2UGz80nL

"That equates to roughly 3,000 fewer car break-ins than this time last year, which is really, really good news for us," said Chief Scott.

He says it's thanks to extra foot patrols and educating people.

"We would like to get it down to zero, but it's still happening," said Chief Scott.

Just not to Kubin and his wife.

Chief Scott tells ABC7 News he believes it's a small group of people that are responsible for a lot of the issue. He says SFPD is focused on identifying who those people are and bringing the best cases to the District Attorney's office for prosecution.

Kept on my dashboard. pic.twitter.com/4lEUC7D9fS