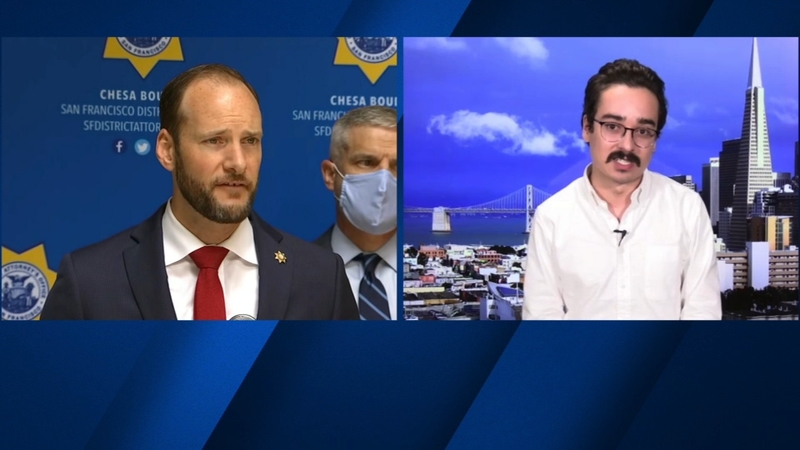 Even as San Francisco struggles with a sharp increase in violent attacks and property crimes, the public rift between San Francisco's police chief Bill Scott and district attorney Chesa Boudin is growing even wider.

Chief Scott terminated his department's MOU, memorandum of understanding, with the DA's office.

It was a deal for the district attorney to investigate police shootings, deaths in police custody and other incidents in which police conduct is called into question.

"Everybody who has anything to do with this MOU, and the impact of it, all depend on this being a fair system that we all have confidence in. That's what this is about," the chief said.

And now, in response, a new exclusive interview with District Attorney Chesa Boudin by our media partner, The San Francisco Standard, which shares ABC7's mission to build a better Bay Area.

"Our departments have to function as a team if we're going to keep San Francisco safe. And we're doing our best to do that under very difficult circumstances. There are lots of people out there who would like to see us fighting and pointing a finger at each other. And refuse to work together. San Francisco deserves better and they're going to get better from me," DA Boudin said.

SF District Attorney Chesa Boudin responded to the SFPD's announcement that they are pulling out of an agreement over investigations.

San Francisco Standard reporter Michael Barba spoke to ABC7's Kristen Sze on Friday, Feb., 4 on our 3PM show "Getting Answers" to talk about about his conversation with Boudin and how a trial of a police officer may have triggered the deal's off from the police right with the MOU.

"In advance of this trial, a defense attorney for the officer filed a motion seeking to dismiss the case and she's alleging that there was misconduct by the district attorney's office. She says that she felt pressured to withhold evidence in the case. And that revelation really troubled Police Chief Bill Scott, who went ahead and pulled the department out of this long standing agreement with the district attorney's office," Barba said. He also says a judge did weigh in on this.

"I believe that she said that she didn't see the exculpatory value in the evidence, meaning that she didn't see how this evidence being withheld impacted the case at hand. But that's kind of a different question as to whether or not the district attorney's office is violating this MOU that it has with the police department."

Barba says DA Chesa Boudin said he doesn't think it's a coincidence that this announcement came before the trial is about to begin in court.

"I mean, this is the first time that he's about to put the San Francisco Police officer on trial. He's charged several but none of those cases have gone to trial before and we finally have one starting next week. So he doesn't think it's it's coincidental that came up. And he's questioning whether or not the chief is really politicizing the issues that he has with the agreement between the two departments," Barba said.

Watch the full interview Michael Barba in the media player above.