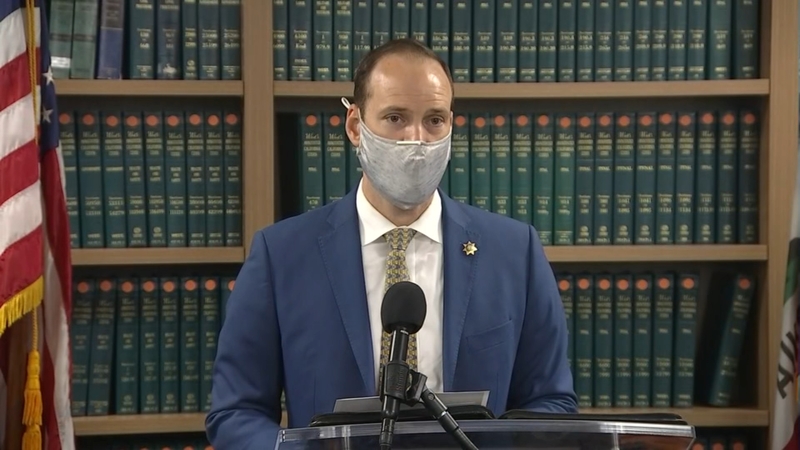 SAN FRANCISCO (KGO) -- San Francisco District Attorney Chesa Boudin publicly responded to Police Chief William Scott's announcement that his department is pulling out of an agreement that makes the DA's office the lead investigator for all police use-of-force incidents.

Boudin told reporters today that the agreement has worked in the past, believes it's salvageable, and would like to discuss it with Chief Scott.

The MOU agreement dates back several years and was actually first introduced under then District Attorney George Gascon. Boudin renewed the agreement this past July.

SFPD's move comes as a department officer is scheduled to stand trial next week for allegedly beating a man with a baton while responding to a domestic violence call back in 2019.

Last month, a DA investigator involved with the case testified that she allegedly felt pressure to withhold evidence.

Stephanie Sierra: "We have the opportunity to hear from you now about the fact that someone in your own office did testify they were pressured to withhold evidence. So that should concern you...what are you going to do about it now?"
Chesa Boudin: "I want to be clear I can't comment on any potential pending HR issues and I need to know what happened, because if someone in my office is pressured to do something that's improper...that's not acceptable. And whoever pressured them has to be held accountable."

A bill that aims to put pressure on SFPD and the San Francisco DA's office to release more data on domestic violence cases moved forward in committee.

Boudin defended the agreement repeatedly stating it has worked in the past.

"I want to be really clear, it was working," Boudin said.

The San Francisco District Attorney's Office said there were 14 fatal shootings from 2015 to 2018. But since the MOU agreement was signed in 2019, Boudin stressed police killings have gone down 'dramatically.'

But Chief Scott responded saying the DA's office has been 'systematically violating the MOU terms' and the decision to terminate the agreement is based on the sworn testimony from a DA investigator last week. The DA investigator testified in open court she was pressured to mislead police about the status of a criminal investigation.

If you ask Boudin--that testimony predates his time as DA.

Stephanie Sierra: "Regardless of whether this predated your time or not... Are you actively working to figure out what exactly happened in this particular case?"
Chesa Boudin: "Absolutely, I'm not aware of one iota of evidence ... not an email... not a documented conversation, nothing that occurred during my tenure... that could possibly suggest that it is ever acceptable to be less than 100% truthful."

Yet, Chief Scott said the DA's office continues to be in violation of the agreement stating: "It has failed to respond to multiple requests from SFPD investigators to take part in ancillary criminal investigations, as the MOU requires."

Chief Scott said he stands by his decision.

But Boudin remains confident they'll work it out.

"I'm confident that he will see - this team - under my leadership has done things by the book," said Boudin.

The DA's office released a statement saying in part, "It is disappointing but no coincidence SFPD chose to withdraw from this agreement during the first-ever trial against of an on-duty San Francisco police officer for an unlawful beating."

The termination is set to take effect in 2 weeks.