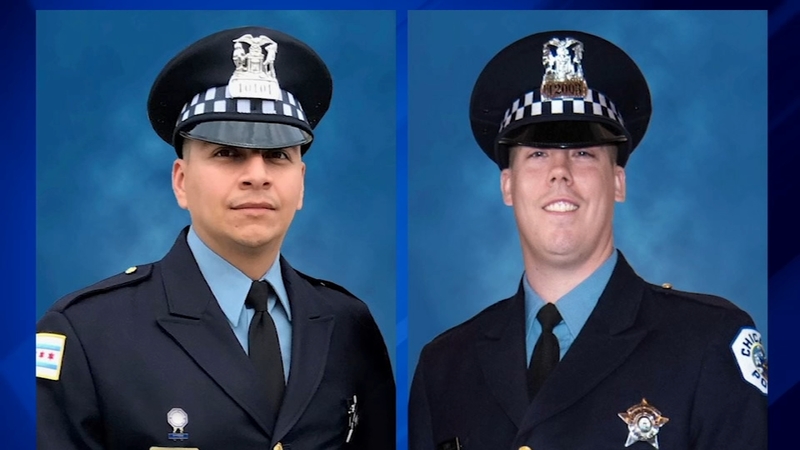 CHICAGO -- The Chicago Police Department is in mourning Tuesday after two officers were fatally struck by a train while chasing a suspect on the South Side Monday.

Police have been on the scene at 103rd Street and Cottage Grove Avenue all night investigating the deaths of two of their own.

Shortly after 6 p.m. Monday, the officers responded to a call of shots fired in the Rosemoor neighborhood. The officers then chased a suspect up to the train tracks at 103rd and Cottage Grove Avenue, where they were struck by an eastbound South Shore Line train bound for Indiana. The officers were pronounced dead at the scene.

The Chicago Police demonstrated its highest honors as the top brass of the department retrieved the officer's bodies from the railway, placing them into two separate ambulances and them accompanying them in a procession which began just before 5 a.m.

The procession went past the 5th District where the officers were stationed, going down the Bishop Ford and the Dan Ryan to get to the Cook County Medical Examiner's Office.

The procession for two CPD officers fatally struck by a South Shore Line train makes its way to the medical examiner's office.

"Shock. I mean here we are again. It highlights again just how dangerous this job can be. I often say the most dangerous thing a police officer can do is take a weapon off of an armed individual, and that's what they were doing, with no regard for their own safety," said Chicago Police Department Superintendent Eddie Johnson

"We've lost two young men, both fathers, young families," said Mayor Rahm Emanuel. "This holiday will never be the same for those two families. While our hearts are with them we lost people who answered the call to try and make Chicago a better place."

Johnson said 2018 has been an "immensely difficult" year for the Chicago Police Department in terms of officers killed in the line of duty, as well as an uptick in officer suicides. He noted it's been a particularly difficult year for the 5th District.

"Pray for the families of these two heroic young men, pray for the 5th District who, even tonight, will stop at nothing to safeguard the community," he said.

It's been a particularly tragic year for Chicago's 5th Police District. Officers at the district told ABC7 that counselors will be on site to help officers and staff grieve.

In addition to losing these two officers, the 5th District has lost at least two others to suicides.

Both officers fatally struck by a South Shore Line train worked in the city's 5th District, which had already seen more than its fair share of tragedy this year.

Commander Paul Bauer and Officer Samuel Jimenez were both members of the department that lost their lives in the line of duty.

Later Tuesday, two crosses will be placed in front of the department offering both comfort and a grim reminder of the two officers that will no longer be walking through those doors.

Police said a suspect was taken into custody and a gun was recovered at the scene.

Meanwhile, the South Shore Line says to expect delays to continue during the morning rush hours.