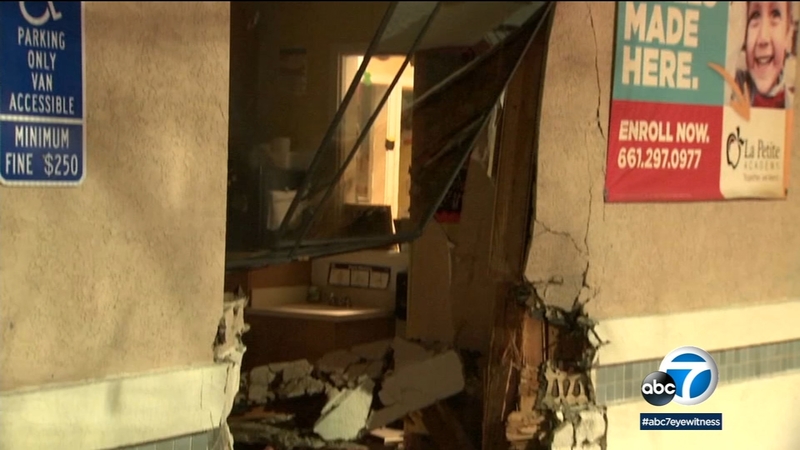 SANTA CLARITA, Calif. -- An SUV accidentally slammed through a wall and into the classroom of a daycare facility in the Saugus area of Santa Clarita, sending three children to the hospital, although no major injuries were reported, according to authorities.

Paramedics responded to the crash reported at La Petite Academy located at 28041 Seco Canyon Road at around 4:30 p.m.

A statement from the academy said a "school family member's vehicle" struck the building and drove into a classroom, according to the Associated Press. Three children and a staff member were in the classroom and they were taken to the hospital for evaluation, the statement said.

"I was called and told the car went through the wall and that a bookcase fell on her, and that she's fine and to come see her," parent Allison Adler said holding her child Shayna. "I'm a physician, so I looked at her and I said 'OK, she looks good.' I was shaken but I was kind of relieved a little bit, too."

Shayna and another toddler had been trapped under a bookcase. A third child suffered a cut on his forehead.

A car slammed into a daycare center in the Santa Clarita area, injuring three children, according to L.A. County Fire Department officials.

All three were airlifted to the hospital to be checked out as a precaution. All three toddlers are at home recovering.

"I was freaking out. I dropped my other two kids off at a friend's house and drove down there... scary moment, but when I got to the hospital she was singing so that was a good sign," Shayna's father Steve Adler said.

AIR7 HD was over a Northridge hospital as the three victims were being transported via helicopter.

The driver of the vehicle was cited for not having a license, according to the L.A. County Sheriff's Department.

The school was evacuated and temporarily closed.

The cause of the crash is under investigation. Witnesses said the driver may have stepped on the gas pedal instead of the brake.

La Petite Academy is a national chain that offers daycare, pre-school and kindergarten.