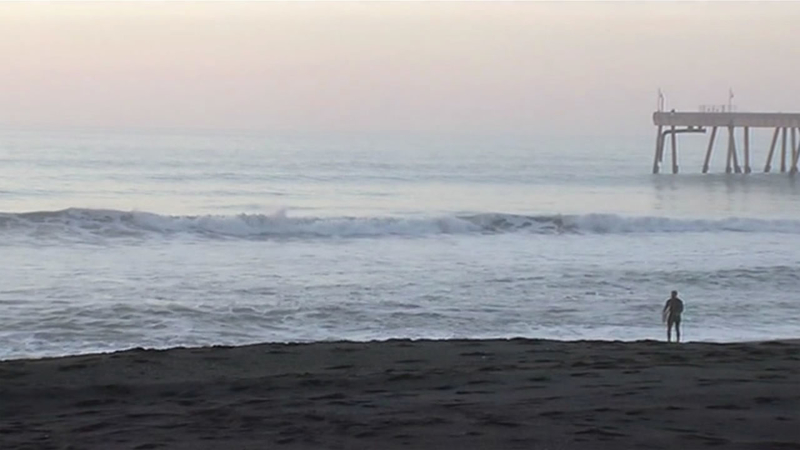 PACIFICA, Calif. (KGO) -- The U.S. Coast Guard and a Good Samaritan dove into action to try to save a couple trapped by rough waves off a Bay Area beach. Sadly, one person has died.

ABC7 News learned the man who died is 60-year-old Larry Moore of Pacifica. Witnesses say he was trying to save his wife who got swept into the water by a sneaker wave.

Surfer Trevor Griffiths said, "One word was all I heard, 'Help!'"

Griffiths was watching the waves from Sharp Park Beach when he heard a woman cry for help. She was in the water, struggling to stay afloat.

Griffiths said, "I grabbed her and helped her get up the beach, but we got sucked back in and thrown over one time."

However, he was able to finally get her to safety. Griffiths said, "She said that she was walking and got swept out and that her husband had tried to go in after her."

But Moore was swept out by a strong rip current and witness Beth Grossman said the waves kept taking him back out into the ocean.

Firefighters searched for the Moore from the beach and a U.S. Coast Guard chopper was called in to scan the shore until he was found.

Clyde Preston from the North County Fire Authority said, "They were able to lower a rescue swimmer from the helicopter into the water and grab hold of the victim."

Both Moore and his wife were taken to the hospital. Rescue crews believe Moore may have been in the water for more than 15 minutes.

Man's female companion was rescued and is being treated at Seton Med Ctr. pic.twitter.com/iQopZnugBo

Another beachgoer said, "We've had a lot of people pass away here, unfortunately."

The warning signs are posted everywhere about surf danger, but the ocean can be deceiving on warm or sunny days.

Surfer Greg Gubser demonstrated how easy it is to get slammed down by crashing waves. He explained, "When water drains off the beach, it just trips you up, sucks you into the underwater hole and the next wave breaks on your head."

Again, there are warning signs about the danger of sneaker waves and rip tides posted all along Pacifica's shoreline. So swimmers, surfers, and beachgoers need to beware and remember to never turn your back on the ocean.

NOAA: How to Avoid Getting Caught in a Rip Current