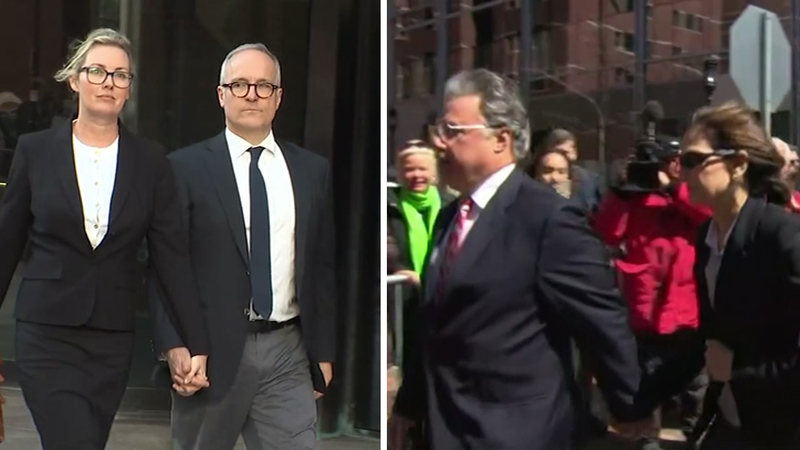 BOSTON, Mass. (KGO) -- In a filing made Wednesday, Peter Sartorio's attorney asked to continue his court appearance to April 30th, writing that he "... intends to plead guilty to an Information that the government has advised it will file prior to April 30, 2019. The government has advised defense counsel that it takes no position on this Motion."

It's not clear what Sartorio of Menlo Park will plead guilty to. He's currently charged with Conspiracy to Commit Mail Fraud and Honest Services Mail Fraud.

Sartorio is the first Bay Area parent in the college admissions scandal to say he intends to plead guilty. According to the criminal complaint, the packaged food entrepreneur paid $15,000 in cash for the college entrance exam cheating scheme for his daughter.

Actress Lori Loughlin was smiling as she walked into court. When she arrived at court, fans and detractors were screaming her name, including one who yelled, "Lori, pay my tuition." Two women also held signs that said, "Lori, please pay my tuition" and "After you get out of prison of course."

Loughlin wasn't smiling when she left court and neither was actress Felicity Huffman.

Also seen arriving at court Wednesday were Elizabeth and Manuel Henriquez of Atherton. According to the criminal complaint, the couple paid for the college entrance cheating exam scheme four times for two daughters.

Elizabeth, her daughter and a test proctor allegedly "gloated" after one test that they had "cheated and gotten away with it." The couple's oldest daughter was a purported tennis recruit at Georgetown University according to the complaint.

Manuel Henriquez has stepped down as Chairman and CEO of Hercules Capital, a publicly traded specialty finance company in Palo Alto. They did not answer questions before being whisked away.

Also at court, Bruce Isackson of Hillsborough whose daughter was a purported UCLA soccer recruit, even though the soccer club she claimed she was team captain of said she never played for them.

We also got our first look at the Colburns, the Palo Alto family indicted on money laundering in addition to mail fraud charges after demanding a preliminary hearing. Their attorney tells ABC7's Melanie Woodrow they are innocent and will not take deal.

Our first look ever at Dr. Colburn and Mrs. Colburn indicted on money laundering in addition to mail fraud charges after demanding a preliminary hearing. Attorney tells me they are innocent and will not take deal. https://t.co/UdyaaGBAv6 pic.twitter.com/9zG9ukwj71

Dr. Colburn is currently taking a leave of absence from his medical practice.

Check out more stories and videos about Operation Varsity Blues.

I believe this is Manuel and Elizabeth Henriquez from Atherton walking in. Per complaint, Elizabeth, her daughter and proctor gloated they cheated and got away with it. https://t.co/RFBYhF1VSN pic.twitter.com/SM3TLeo8iX

I’m watching the feeds. This is what it looks like outside Boston courthouse right now. #VarsityBlues https://t.co/RFBYhF1VSN pic.twitter.com/e8aUX1DzTz