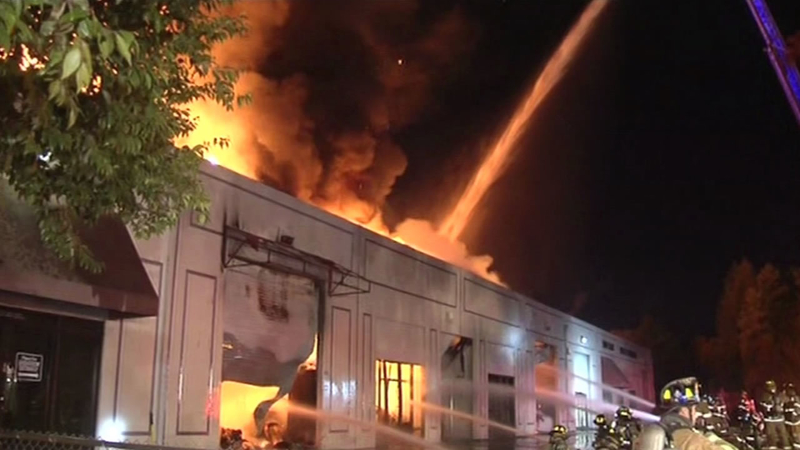 CONCORD, Calif. (KGO) -- Soaring flames reached into the sky after a fire erupted inside an East Bay warehouse. Firefighters say furniture packed inside helped fuel the out of control fire.

The fire broke out around 7 p.m. on Diamond Way and Challenge Drive in Concord. At one point, passing drivers on Interstate 680 were stopping on the freeway to watch the flames.

The two-alarm fire gutted the warehouse of Sam Clar furniture. CEO John Schwartz says his family was enjoying Thanksgiving dinner when they got the call.

"We were in the middle of Thanksgiving and started getting phone calls from employees and we were contacted by Bay Alarm," Schwartz said.

Firefighters spent nearly an hour trying to get the fire under control. Tall flames could be seen from the freeway. The longtime East Bay company founded in 1939 sells commercial office furniture. That's what fueled the flames.

"The area of the building that burned was the warehouse section. So that was all piled in racks in cardboard wrapped in plastic," said Robert Marshall, Contra Costa County Fire Marshal. "So, once the fire got going it probably got going very quickly."

Fire crews battled the fire from the outside. It was too dangerous to go in. The cause is under investigation. The corporate office was saved.

"Well it's certainly not what I expected to spend Thanksgiving on, but nobody was hurt," said John Schwartz.

Despite the damage, the CEO said they hope to find a new space so they can be up and running by next week.

#ChallengeIC on scene of a large commercial structure fire in Concord, now second alarm. Fire through roof. On Diamond way at Challenge

CEO of Sam Clar says family was eating Thanksgiving dinner when got call about fire. Moving computers from building. pic.twitter.com/VnVDEng5RB