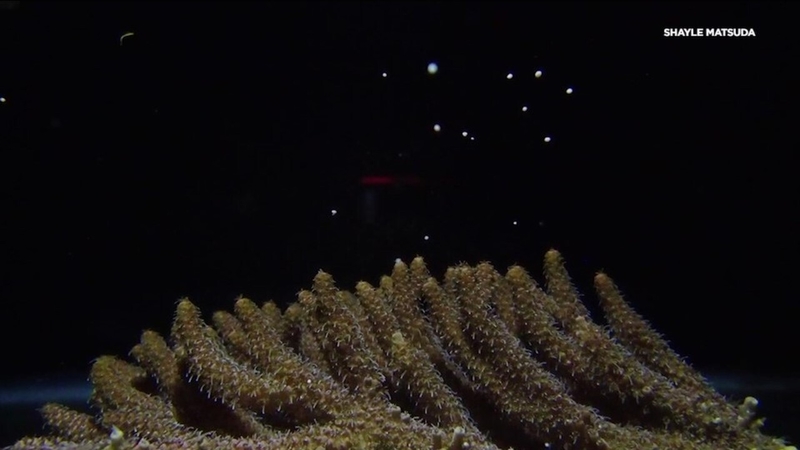 SAN FRANCISCO (KGO) -- The California Academy of Sciences in San Francisco is welcoming some new additions, and they could play an important part in rescuing the world's coral reefs from climate change.

For millions of years, colorful coral reefs have provided critical refuge for sea life around the globe... But with ocean temperatures steadily warming from climate change, Bay Area scientists are racing to learn how to rescue the reefs themselves.

"They're just two and a half days old at this point, and just swimming around in the water column," explains marine biologist Elora Lopez-Nandam, Ph.D., a marine biologist at the California Academy of Sciences.

In a lab at the Academy, Lopez-Nandam is keeping an eye on a newborn generation of coral larvae. They're the tiny organisms that will eventually begin secreting calcium carbonate, building the skeletons that will develop into the living coral reefs we're all familiar with. The coral spawn just once a year, and normally, only in the ocean - until recently.

"So this was the first lab in the US to be able to do this Ex-situ, which means in the lab with artificial lighting, and the second lab in the world to do so as far as I know," she adds. "The lighting in our lab is synced to the lunar cycle in Australia, where our corals came from."

TECH FOR GOOD: Bay Area man is using his 3D printer and calcium carbonate from stones that could restore coral reefs

The spawning lab looks something like a darkroom, and precisely mimics the light and temperatures of the habitat where the corals were originally collected, in a delicate process. It was originally set in motion four years ago by assistant curator Rebecca Albright, Ph.D. and her team, who then watched and waited at spawning time, not certain what would happen.

"And then Rich Ross, the aquarium biologist, texted me and said, 'You're not going to believe this. Everything just spawned.' And so it was day 15, after the first year, everything went crazy," Albright remembers, laughing.

Now, that excitement has given way to a new cycle of research, aimed at helping to protect the world's threatened reefs from climate change. To do that, researchers are testing the limits of the coral's adaptability. The key is temperature change.
The Academy team plans to expose different groups of larvae to varying degrees of warming, from normal to extreme, for about 24 hours.

"And in about six months when they're juvenile corals, heat them again. And so the goal will be to see whether the corals that survived heat stress as larvae, then become more heat resilient once they're coral colonies," says Lopez-Nandam.

She says Academy researchers also plan to sequence the coral's genomes, to see if specific specimens are better suited to surviving warming ocean temperatures. It's all part of the painstaking effort that launched some four years ago.

"What we can do is ask and answer some really, really advanced scientific questions that you wouldn't be able to do elsewhere, and then translate all of that knowledge and technology to on the ground efforts that are approximate to coral reefs," says Albright.

And perhaps help protect these fragile and essential ocean creatures.