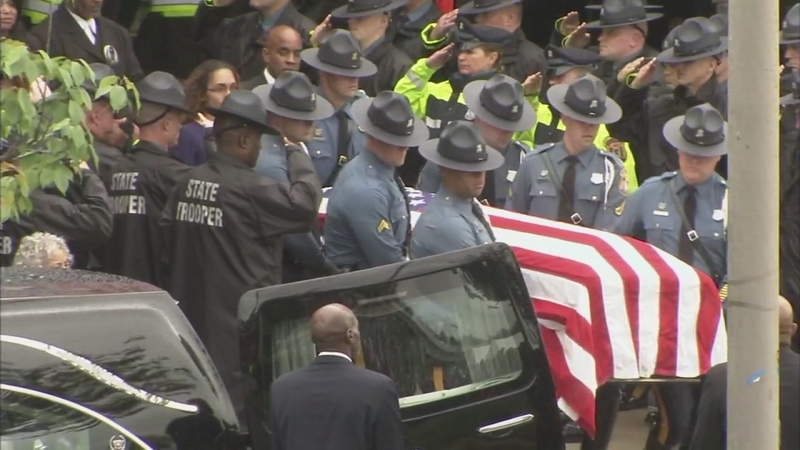 WILMINGTON, Del. -- Family, friends and thousands of law enforcement colleagues gathered in Wilmington, Delaware on Friday to say a final farewell to a Delaware state trooper killed in the line of duty.

The light morning shower of rain became a torrential downpour just as Corporal Stephen J. Ballard's hearse arrived at the Chase Center on the Riverfront Friday morning under a soaked American flag to the haunting sound of bagpipes.

Watch Action Cam raw video of procession and arrival of the casket of fallen State Trooper Stephen Ballard at the Chase Center in Wilmington, Delaware.

Officers came from New Jersey, Pennsylvania and Ballard's home state of Maryland. Some drove in from as far away as California and parts of Canada.

All stood at attention as Ballard's casket was carried in to the Chase Center.

Watch Action Cam video of the arrival and transfer of the casket of fallen State Trooper Stephen Ballard at the Chase Center.

His wife, Louise Ballard, was stoic as she carried her 5-year-old daughter inside.

Members of the public were invited to pay respects.

"It's important for me because it's important we support our local police officers. I didn't know the corporal, but things like this don't normally happen around this area, so it comes as a shock to everyone," said Twanda Waller of Newark.

After that, the casket and the family, including the corporal's widow and daughter, prepared for the slow escorted ride to the cemetery and the burial.

Those at the funeral called it a celebration of life. They were moved by what was said.

"It was upbeat, pretty decent going home service, if you will, a lot of people spoke. They spoke out against violence as a whole. I think the overall message is to stop the violence," said C. Linwood Jackson, president of the Delaware NAACP.

Capt. Luis Hernandez of the New Mexico State Police said the service was about the love of family, not ill will.

Since then, surrounding communities have held fundraisers for Ballard's family. Community members said it's the least they could do for a man who dedicated his life to protecting others.

Funeral for Cpl Stephen Ballard: Jeannette Reyes reports during Action News at noon on May 5, 2017.

Remembering Cpl. Ballard: Matt O'Donnell reports during the Action News Update at 10 a.m. on May 5, 2017.

Final farewell for fallen trooper: Jeannette Reyes reports during Action News at 6 a.m. on May 5, 2017.