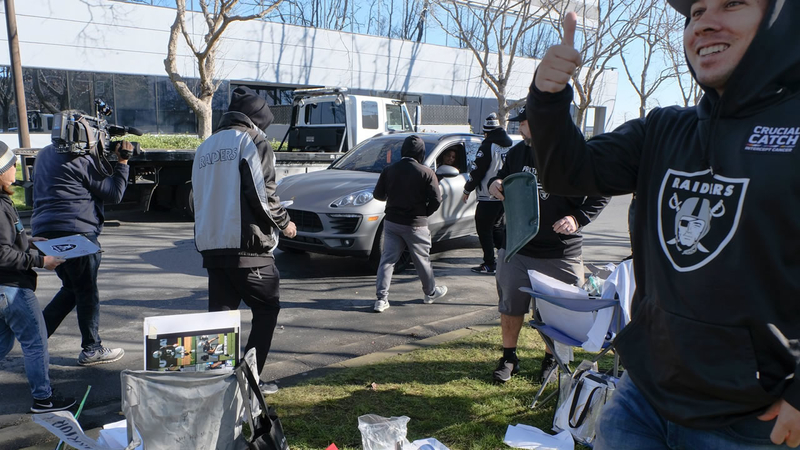 Raiders clear out lockers after final season in Oakland

ALAMEDA, Calif. (KGO) -- As the Oakland Raiders cleared out their lockers and left the team's Alameda headquarters once and for all, die-hard fans gathered outside to say one last goodbye.

It was a study in contrasts, NFL style.

Two scenes... One inside the Oakland Raiders locker room at headquarters, and the other, outside, where Stephanie Bravo of Newark has dreaded today.

"So this is the end of it. Clean out and head back home."

Loyal to the bitter end. As Oakland #Raiders clear out for the last time, die-hard fans gather outside hoping for one more autograph. They include Frank Gonzales and his 5 year old son, Raider---"A Raider for life," literally. @dwa5ington signed. #abc7now On to #LasVegas pic.twitter.com/H9IwlePc2O

Any player can talk about the memories contained in sweaty workout clothes or the piles of shoes. But in the locker room, even the walls could tell stories, not that they will again, as the team abandons Oakland for new digs in Las Vegas.

"Any sentiment about leaving?" we asked quarterback Derek Carr.

'We'll miss it but still be here in the offseason, so not yet."

Tell that to the die-hards outside.

"It's bittersweet, but I'll still be a fan," said Jer Ascondo.

A vibe passed down through generations in some cases. Why else would Frank Gonzales take this day to travel here all the way from Modesto with his five-year old son who he named, wait for it...

"So that was the plan? To make him a Raider for life?" we asked.

"To be a Raider for life, yeah. My wife didn't want it. My mother didn't. But it was something we had to do," said Frank.

In the same way that today was something they had to do. He felt almost morally obligated to join other citizens of the Raider Nation, to say thanks one more time, and maybe get an autograph.

"You won't let him play with that in the parking lot, will you?" we asked Frank.

"No way. This is going in his room somewhere."

Unlike the team, it will stay awhile.

This Monday, Dec. 30, 2019 image shows the Raiders locker room in Alameda, Calif. as the team clears out before moving to Las Vegas.