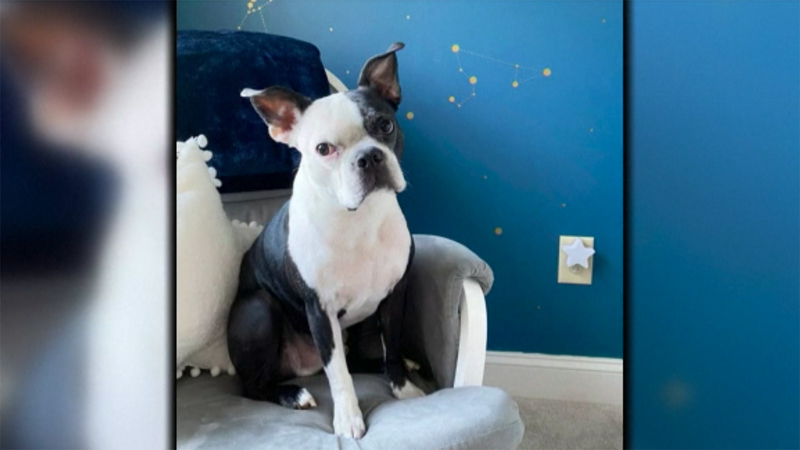 GLASTONBURY, Conn. -- What a good boy! Henry, an 8-year-old Boston terrier, has been credited for saving the life of his owners' 9-month-old baby.

Owners Kelly and Jeff Dowling said their pooch was behaving oddly Monday night, repeatedly barging into their daughter's nursery and waking the baby.

"Usually the dog puts himself to bed and kind of keeps to himself," Kelly Dowling said. "That night, he was headbutting the door open and going into her room and standing there. Every time I shooed him away, he would go back in as soon as my back was turned."

The Glastonbury, Connecticut, parents knew their child had a cold, but they said Henry sensed her symptoms were worsening.

"She wasn't clearing her airway. She started to turn blue and go rigid. She really couldn't she couldn't get air, couldn't get any oxygen," Kelly Dowling said.

The couple rushed their baby girl to the hospital, where doctors were able to clear out her airways and send her back home later that night.

Last night the dog kept breaking into the nursery and waking the baby. She’s been sick, and I was getting so fed up with him.

Until she stopped breathing.

We spent the night in the hospital. I don’t know what would have happened if he hadn’t woken her. We don’t deserve dogs. pic.twitter.com/PBJCJVflgh

"I don't know what would have happened if he hadn't woken her. We don't deserve dogs," Kelly Dowling posted to Twitter.

Thankful for their hero pup, the Dowlings have decided to spoil Henry this Christmas.

"He was allowed to sleep in bed with me last night, and he's got a steak in his future," Jeff Dowling said.

"He's never done anything quite so heroic before," his wife added.

Henry has spent the last two days being treated like the king of the castle, which—if I’m honest—is no different than any other day. pic.twitter.com/L9Wnm7jHYN