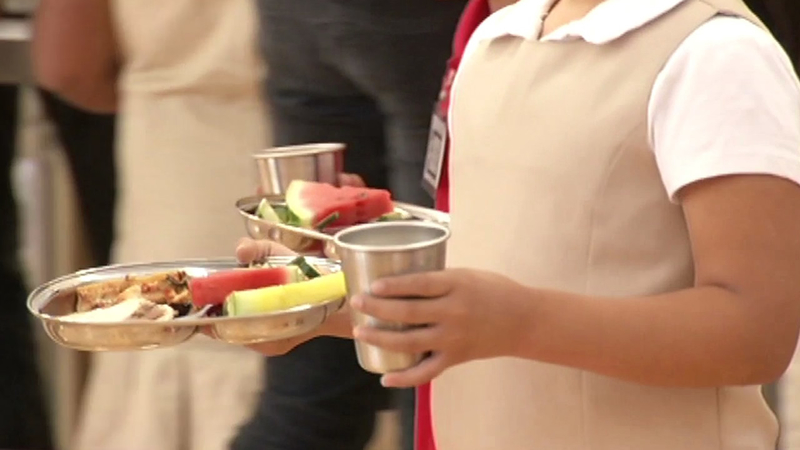 MARIN CITY, Calif. (KGO) -- School lunches are undergoing a big change in Marin County. In fact, one school might be making food history. It says it's the first one in the country to have all organic lunches. And that's not all.

This is school lunch as a fine dining experience, with fresh flowers on each table and the chef sitting down to personally explain his menu; one he's made from scratch.

And everything is 100 percent organic and non-genetically modified. The Marin City School District is said to be the first in the nation to offer that.

"It's literally the best we can get, that's the starting point," said Judi Shils, director of Turning Green. "That's how we can begin to start making bodies healthy and minds healthy."

Turning Green is a nonprofit that launched the Conscious Kitchen at Bayside Martin Luther King Jr. Academy in 2013 and this year added a second site. Some of the produce comes from the school's own garden.

"It gives you more energy throughout the day," said one student.

Where else can you talk to the chef about the school lunch he just made from scratch with 100% organic food? pic.twitter.com/SMAv7JnhvR

Because many of the students qualify for free or reduced lunch, the federal government picks up the tab for the meals. But the Conscious Kitchen also has an influential local partner. Justin Everett, the acclaimed Executive Chef at Cavallo Point Lodge in Sausalito, consults on menus and mentors some of the students.

"Food speaks to everybody and that's this great way that we can connect with kids," said Everett.

For some, it's a learning process.

"It's fresh, doesn't have pesticides in it," said another student.