KGO
By Wayne Freedman
MILL VALLEY, Calif. (KGO) -- Usually, it's the kids who stand in line during a school day. Not in Mill Valley, Monday morning when a bomb threat caused an evacuation at Mill Valley Middle School.

"I mean, what are the kids thinking? They have to deal with this," said Tom Conner as he waited to pick up his son.

Parents of 1000 evacuated kids from MillValleyMiddle School@line up to collect children following a bomb threat on campus. #abc7now. #millvalley pic.twitter.com/Z2Yq9ImBnW

"It was brief. I could not tell if it was a man or a woman, but the voice clearly stated there was a bomb for sure."

The school initiated a yellow alert lockdown, for which they had practiced. No one imagined a bomb threat could become reality.

"It's frightening. It cannot happen in Mill Valley, and yet here we are," mused one mother.

As police from multiple agencies converged on the campus, staff evacuated 1,000 students to a nearby community center and messaged their parents. Before long, the line of worried parents stretched hundreds of feet around the building.

"Our kids have been conditioned and trained that this is the way our world works. That is sad," observed Sylvia Marino, the mother of an 8th grader.

Some of these parents have been standing in line for more than one hour. Mill Valley Middle School remains evacuated due to bomb threat. Police and fire remain on campus. #abc7now pic.twitter.com/EC8zVgKfwE

It's the United States of America in the 21st Century.

"This is the first time this has happened in our lifetime here," said another parent.

They hope it will be the last. 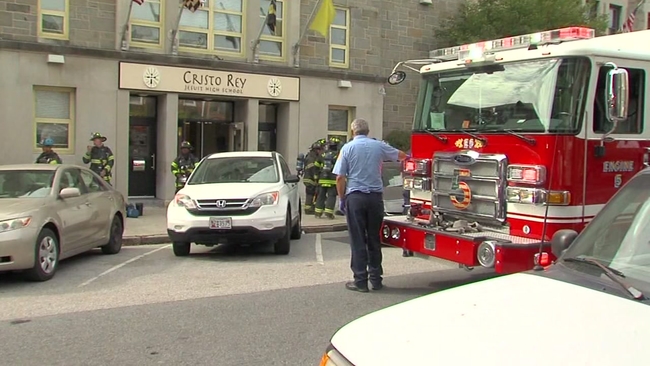